Posted on 27th May 2015 by Matt Badcock in Featured, National Game Awards with 0 Comments 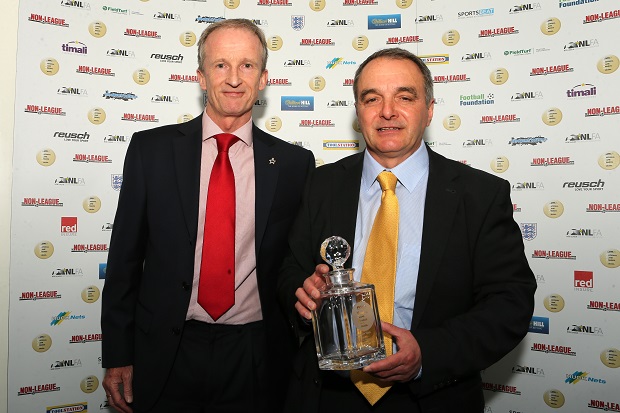 HARROGATE TOWN are the angels of Non-League – and boss Simon Weaver says the players keeping their cool on the pitch is vital for their aim to be a community club.

The Vanarama Conference North outfit didn’t receive a single booking for dissent this season – the only club from Step 1 to 4 to have such a clean record.

Throughout the 2014-15 campaign, The NLP has printed the Fair Play table, provided to us by the FA, and Harrogate have set the standard throughout the season.

The reason seems to be a collective spirit to portray the club in a positive light, with every Harrogate player required to sign up to a Code of Conduct.

“Emotions do run high on a football pitch and you might not be able to prevent everything, but telling the ref where to get off right in his face isn’t right at any level,” Weaver said.

“At this level we’ve got young fans watching five yards away. So we’ve got a Code of Conduct, dissent is a fineable
offence, and all the lads sign up to it. We’ve got a really good group, who have got brains.

“Dissent is only going to cost the player and us as a team. If you let your emotions get away, you’re not focussed on the next thing.

“We’re trying to be a community club. If I take a player along to a school and he’s done that, it’s not what we want to be known for. I’m pleased to receive this award and it means it’s working.”

Weaver said: “We obviously wanted to finish higher in the table than we did, but there are valid reasons for that – we had 46 injuries this season. We should probably win that award as well!

“Keeping our discipline in an environment where we have had quite a lot of things going against us – and we’ve not lived up to expectations – is proof that it can be done.”