Posted on 28th May 2015 by Sam Elliott in Featured, National Game Awards with 0 Comments 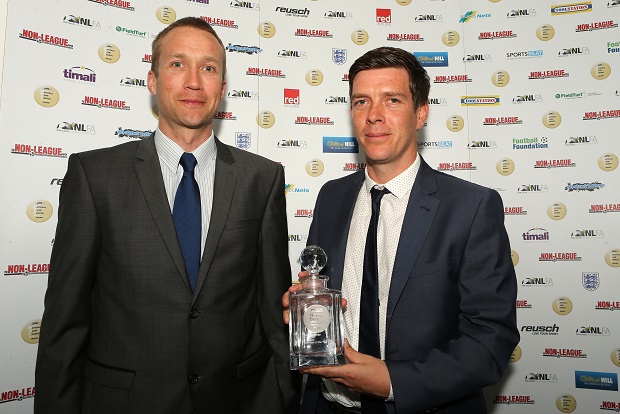 THE FIELDTURF MANAGER OF THE YEAR – DARRELL CLARKE (BRISTOL ROVERS)

THE contrast with 12 months ago was there for everyone to see in all its sweaty, breathless glory.

Darrell Clarke emerged into his Wembley press conference like a man who had just completed a marathon in record time.

Face clammy and looking like he could do with a good drink – he certainly saw to that later that evening – the Bristol Rovers manager had passed his biggest endurance test of them all.

Don’t stop me now. Sprinting more than 60 yards in the opposite direction as Lee Mansell sunk the winning penalty to celebrate promotion in front of nearly 30,000 fans, his personal race had been run. And he did it having a good time.

It was Clarke’s Jose Mourinho moment. Yet a year ago, the fans weren’t so captivated by his strides across the pitch following a painful last day relegation.

Six police horses attempted to restore order as restless locals provoked ugly scenes on the pitch. Bristol Rovers looked like a club in need of major surgery. But the enduring image was not of the rioting.

It was manager Clarke, head bowed and palm on forehead, in tears mourning the total anarchy which was unfolding in front of him.

Relegation was not his fault. He was given just eight games to save the club and they ended up being in the Football League’s bottom two only for a matter of minutes in the whole season – but the crucial ones.

Yet Clarke still accepted responsibility. Truth is, the National Game Awards’ FieldTurf Manager of the Year wasn’t wanted by some ten months ago. Famously, Clarke was greeted with posters demanding his resignation as the players returned to pre-season in July.

His sprint to the fans who sang his name in the immediate aftermath of the shoot-out drama against Grimsby symbolised the completion of his Rovers rehabilitation. And the swathes of votes that crowned Clarke the managerial king proves he’s a little more popular than he once was.

He said: “We’re really relieved to get promotion and I think I showed my emotion when Lee tucked away the penalty. I almost pulled a hamstring!

“I don’t think I have ever run that fast in my life, the noise and the colour just took me away.

“Without a doubt when you look back at that and compare it to the final day of last season when we lost at home to Mansfield, well, you can’t compare it.

“I really wanted to share it in front of our fans and express myself while enjoying it with the supporters.

“It’s been mentally draining this season, but what doesn’t kill you makes you stronger, as they say. I certainly believe all the experiences have made me a better manager. To bounce off the floor after the end of last season wasn’t easy but I do feel like we’re back on track – and we’ve done it together.”

Clarke is a young manager learning, but it’s easy to forget that Sunday’s win over Grimsby confirmed his third promotion at the age of 37.

And any boss who has the ability to get the better of the play-offs is worth his weight in gold. He took Salisbury City through the Southern League via that route in 2011, and two years later the Conference South.

He got out while the going was good, in June 2013 making the decision to become John Ward’s number two at the Memorial Stadium. It proved a wise move as he was given his chance to get to know Rovers as Salisbury started to sail into choppy financial waters.

He added: “I’m at a great club, I’m proud I’ve taken them up and I’m very proud to have three promotions to my name. It’s all about building your CV up, I think my career is on the right foot at the moment. I’m in a good place.

“This National Game Award is also something I am very proud of – especially as people would have been voting before Wembley. It would have been a bit awkward if we’d lost!”