Posted on 19th June 2015 by Matt Badcock in England C, Featured with 0 Comments 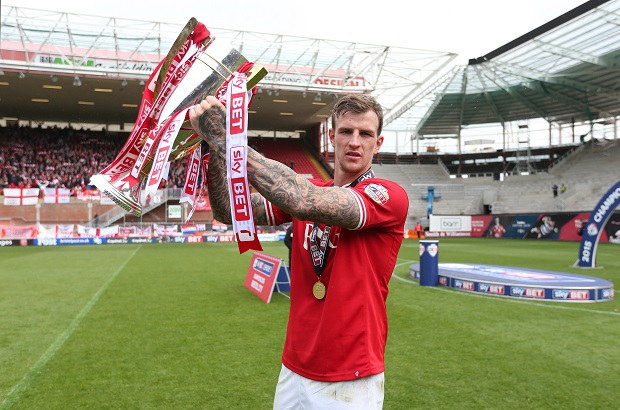 ADEN FLINT will step out for Bristol City in August as he makes the next step of a career that has taken him from the Central Midlands League with Pinxton to the Championship.

The 25-year-old powerhouse centre-half was capped twice for England C during his rise when he was playing in the Conference North for Alfreton.

And he holds fond memories of wearing the Three Lions against Wales and then for an excellent 1-0 away win against Estonia in the International Challenge Trophy.

“Representing your country at any level and pulling on the shirt with The Three Lions is great,” said Flint, who has just helped Bristol City win the League One title and the Johnstone’s Paint Trophy at Wembley.

“Realistically I don’t think I’m going to play for the full England team so I’m proud to say I’ve pulled on an England shirt twice and I’ve got two caps to prove it as well.

“I’ve come a long way since then. Since I first signed professional I’ve always wanted to keep kicking on and I don’t think I’ve looked back. But I’m grateful for where I’ve come from – Non-League football set me on my way and put me on the radar.”

Flint remembers the step-up in standard from his usual club football.

“Both times I was the only player not playing in the Conference Premier,” said Flint, who was part of Alfreton’s Conference North winners before moving to Swindon. “It was nice to go and play with people who are playing higher.

“I was obviously playing Blue Square North so it was a big difference playing away in Estonia against their U23 side. I was playing with players who had played for the C team quite a few times and in my second game in Tallinn I was still bemused by it all.

“I’ve still got my shirts, and my caps are framed. My mum and dad have got one and my grandma and grandad have got the other at their house. It’s an experience I will never forget.”

BARNSLEY manager Lee Johnson says representing England’s Non-League side helped push on his career – and he says the Tykes’ scouts have a close eye on the next crop of young Lions.

To back it up, the League One club’s 34-year-old manager signed former England C captain Marc Roberts this summer from FC Halifax Town.

Johnson said: “I think it’s a real shame the team could be scrapped. I was very proud and honoured to wear the Three Lions, and I know many clubs gained interest in me after viewing the games.

“Now I’m a League manager, I’m disappointed the team could be scrapped as our club in particular have always kept a close eye on the young Non-League talent on show.

“As a club we have a presence at every England C game.”

DAVID STOCKDALE says playing for England C will always be a highlight of a career that has taken him into the full senior squad.

The Brighton & Hove Albion keeper, who played in the Premier League for Fulham, was called-up to the senior set-up by Fabio Capello in 2011.

It gives the 29-year-old a unique insight into both set-ups and how similar Paul Fairclough’s operation is in comparison to his more acclaimed counterparts.

“For us then it was like being in the full England squad,” he told The NLP. “We were representing the whole of Non-League so it’s not any old thing.

“They call it England C, but everything is done properly – travel, training kit, the way you prepare for a game, everything.

David Stockdale in action in the Premier League for Fulham

“That was my first taste of an international team and I’m still proud I did it. The full England squad maybe get a little bit extra kit, but the only thing that’s different is the personnel really.

“It all comes back to being selected as the best of what they’re picking from.

“I’ve still got the pictures. My mum and dad came out to Italy because it was a big thing for us. At that point you’re not sure where your career will go. It’s a highlight to look back on – it was living out a dream to play for England.”

Stockdale – then at York City – played for Fairclough’s side in a 1-0 win in Italy back in 2004. Since then he’s gone on to play at every professional level in the country.

And he’s backed England C to keep capping players as they rise up the leagues.

“There’s over 200 players in the League now who have played for England C,” he said. “If you ask every one of them they will all say they were proud to be in the side.

“It was a chance to go and play in a different country and against different standards. You’re testing yourself. I can’t speak highly enough of it.”