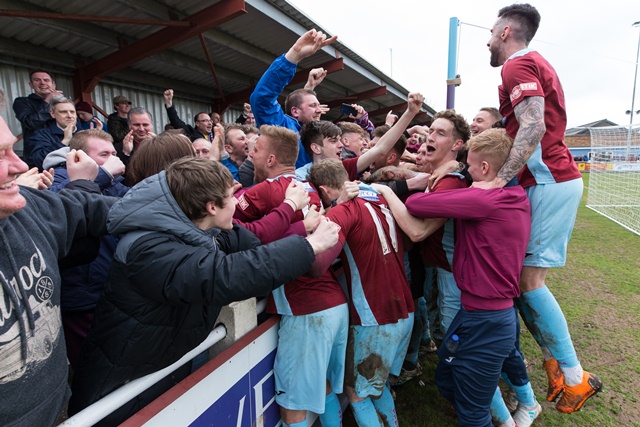 Kevin Sturmey remembers the taxman calling not long after he’d taken over running Taunton Town along with Andy Power.

“We paid the VAT bill for the first quarter we were involved,” Sturmey says. “Then we got a letter from Customs & Excise, as it was then, with interest charges and default charges.

“The club owed money everywhere,” Sturmey continues. “Then in 2011, when we were just moving forward, we had a fire. It wiped out our facilities which were full of asbestos.

“We discovered we were under-insured by £300,000. We’d inherited the policy and it was due for renewal about five days after the fire.

“We had to make two ladies redundant, we had to buy ourselves out of an option – the club had signed an option agreement on the ground for next to no money with no legal advice – so we had to negotiate with developers.

“We ended up trying to do as many deals as possible. I managed to get the person who was awarded the contract to build modular buildings, because that’s all we could afford, but I said part of the deal is, ‘You have to be our main shirt sponsor for two years’. They went bust 80 per cent of the way through the project. My vice chairman Brian Pollard picked up the tab to finish that – hence the boardroom is called the Brian Pollard Suite now.

“Without him I’d be sat here getting wet – we’d have no roof on this building. So it was a tough baptism.”

Sturmey is talking the Thursday after the Peacocks had beaten Salisbury 4-3 thanks to two stoppage-time goals that made it seven wins on the spin and took them to the top of the Southern League Premier Central division.

Sturmey was previously involved as the club’s commercial manager but, with the licensing trade in trouble, left to concentrate on saving his own business.

In 2009, he was part of a development committee set up to help the club’s board before then-chairman Tom Harris, now the club’s president, called to say he wanted him and Power, football operations director and club secretary, to take it on.

Sturmey is CEO, chairman and groundsman – tending to the pitch is his escape – and slowly the club have worked their way back to stability.

The dream of reaching the FA Cup first round proper came a couple of years ago which helped pay off the last bit of an £80,000 brewery loan.

Sturmey says they now have no external debt and operate without an overdraft. Over time they’ve been able to grow on the pitch too, culminating in winning the Southern League West title at a canter last season.

“We’ve got an OK budget but we’re nowhere near a lot of other clubs in our league,” Sturmey says.

“What we’ve tried to do is make sure the players are well looked after and there is a unity throughout the club.

“They appreciate what we do, we appreciate what they do – and it works. At the end of the day, I’ve got posh titles but really I’m chief muck-shovelor! I firmly believe the difference is I understand every facet of our club and our business.”

Sturmey puts their success down to a group of players desperate to win and a feeling of real affinity with the club.

Manager Leigh Robinson, who took them to promotion, left for Truro City earlier in the season but under the management team led by Rob Dray they’ve kept moving forwards.

Players are made to feel special. They have the right food and drink in the changing room before and the club have found long away trips are often better suited to hiring two nine-seater cars rather than a coach so they can get home quicker and more smoothly.

“We try to give the players the tools to do their job, which is to win games,” Sturmey says.

“We leave no stone unturned. The biggest thing we’ve got here is the unity. There’s a great rapport and passion. It’s like these players are born in Taunton. I’m sure a lot of that is because of how we try to do things.”

They now have plans to continue improving their stadium to encourage more fans through the gate and, most importantly, keep them coming back.

“It feels like we’ve come a long way,” Sturmey says.