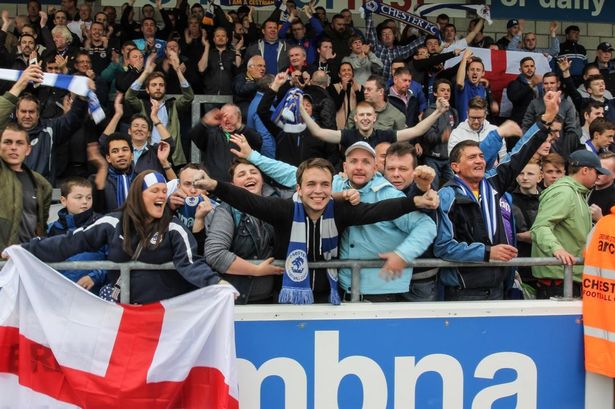 The Blues fell to a disappointing 3-0 defeat at Haig Avenue and the Chester board have condemned the actions of a “very small minority of fans” who travelled to the game.

The official statement read, “Without doubt, 2018 has shown the positive impact that our supporters can have.

Whilst everyone connected was disappointed with yesterday’s result away at Southport, a very small minority of the travelling supporters let both themselves and Chester Football Club down with their behaviour – in particular during the second half.

Entering the field of play during the game at any time is unacceptable behaviour and may see the Club charged and even fined by the Football Association. Such behaviour not only has consequences for Chester FC, but also the individual through potential banning orders enforced through the courts. As such, we remind supporters to stay off the field of play at all times.

In addition to this, Chester Football Club are also aware of a number of issues raised through social media regarding the behaviour of some of our supporters towards fellow fans and the families of the players and management team.

Chester Football Club condemns and will not tolerate such behaviour. Anyone who is identified to have acted in a way that would be considered hostile, threatening or violent will be dealt with as appropriate to their actions.

Nevertheless, these messages should not distract from the superb away support that was received yesterday. The vast majority have been, and will remain a credit to this Community Club.

We would also like to update supporters that feedback from Chester FC fans relating to the Stockport County game earlier this month have been progressed to the authorities. We seek assurances that our fans traveling to away games in the Greater Manchester area will be treated fairly in future”.

Following their defeat on Boxing Day, Chester are currently sitting in third place in the National League North table.