Posted on 31st March 2020 by admin in Groundhopper, Latest News, Vanarama with 0 Comments 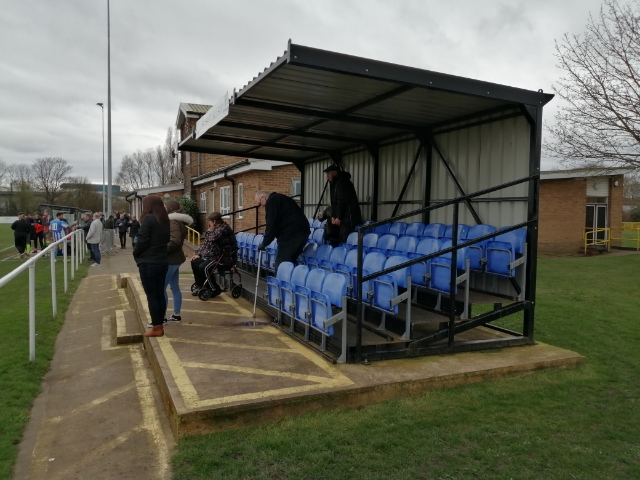 Rightly or wrongly, a few leagues have decided to plough on with fixtures for the time being. Personally, I see nothing wrong with small football clubs continuing until told otherwise but I know other people’s views differ from that. At most of these clubs, obeying the ‘Safe Distance Rule’ for a groundhopper or regular will not prove difficult!

Higher up the pyramid, The National League has also decided to allow its clubs to play their games. This situation, and the curtailment of all ‘professional’ football across Europe, means Notts County’s match against Eastleigh today is billed as the ‘Biggest Game in Europe’. And you don’t hear that very often!

I think it is The Fox who eventually comes up with Darlaston Town 1874 FC of the West Midlands Regional League: a new ground for both of us, which definitely qualifies as a Brucie Bonus for a groundhopper. Darlaston and Shawbury – their opponents – are still Tweeting that the match is on mid-morning, so that’s the decision made.

The M42 is virtually car-less. It gets me thinking just how much traffic is generated by football on any given Saturday? Notwithstanding the masses streaming out of London to watch Manchester United, just how many people are on the move under normal circumstances?

You then have to start wondering about the coach companies whose businesses depend on bussing around the legion of fans. And the cafés and shops around the grounds. And the suppliers of pies and drinks (mind you, at the prices League clubs charge for their food and drink, they should be able to live off the earnings for decades to come!).

And the tax the Government is losing from fuel sales. Yes, the Football Family’s collective carbon footprint is high but a lot of people depend on us to make a living. It’s an uncharacteristically deep conundrum for The Fox and I to be discussing on the way to the West Midlands!

Darlaston’s new stadium is called the Paycare Ground. There’s a large car park and a storage container decorated with “Welcome to Darlaston Town 1874” ‘graffiti’. A club official gives us a warm welcome and there are no complaints when I walk round the ground to take some pictures.

I pay £1 for the programme and read it in the car. It is an excellent effort for a quid, especially bearing in mind the club must have been uncertain if the fixture would go ahead. My first butterfly of the year drifts passed in the sun; it seems miles away from any crisis in this little oasis of peace.

I pay £5 at the entrance hut and head for the roomy clubhouse. There are very tasty filled rolls on sale from the bar plus pies and chips. People in here aren’t really talking about viruses, just looking forward to some good old fashioned football. The toilets are spotless and very well stocked with handwash, though!

The first half is decent. 1874 dominate but make hard work of scoring. They go in at the break just a goal ahead. The second half is not as good. United dominate but cannot score at all. The home side bag their second very late on, seconds after the visitors have a man sent off for two bookable offences.

I somehow manage to pull in my 1,400th football ground today –give or take a few – but I have a feeling that this may grind to a halt pretty soon. Anyway, I’m off to buy some toilet paper…

As well as the Groundhopper’s travel tales and our other great columnists, make sure you get your copy of The Non-League Paper this week for all the latest news in one place on the impact of the coronavirus crisis on society and football’s fightback.

In shops on Sundays and Mondays, it’s always available as a pound-busting digital edition and full replica of the printed paper. Save cash on single issues, even more on longer deals and the pages still rustle too!