Posted on 2nd September 2012 by admin in Where Are They Now? with 0 Comments 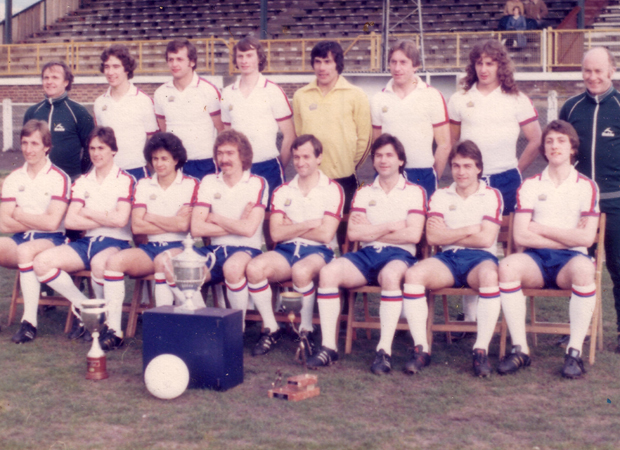 Selected to play in the tournament by the FA, Sutton made it all the way through the competition? after winning two and drawing another of their four group matches.

The only defeat they suffered was in their final qualifying match against Chieti, who ironically were to be their opponents in the final, this time on Italian soil.

Being a professional outfit, Chieti were red-hot favourites, but goals from Bobby Southam and Tony’s brother John gave Sutton a shock? 2-0 half-time lead.

And they weathered a second-half fightback to become the only English winners in the semi-professional era of the Alitalia Challenge Cup.

It turned out to be a memorable occasion for Rains, who commented? previously that the competition was nothing more than a paid holiday for the English teams.

?It was pretty much a routine thing, you go out there, have a jolly up and pick up your runners-up medal because they were professional and we weren’t and no Non-League side had ever won the competition,” Rains said.

?I always remember it was a boiling hot day in a massive ground with about 8,000 people inside including a tiny contingent of about 200 from Sutton in the corner. The FA gave us the England kit to wear.

“The game didn’t go the way the Italians anticipated, they pretty much had the first 15 minutes and then my brother scored and then Bobby got the second.

“Barrie (Williams) had been left in charge for much of the competition as Keith Blunt had a school commitment over the Easter.

“?And at half-time, Barrie, an educated English teacher who talked every journalist I know into submission, was lost for words himself because we weren’t meant to be leading. It wasn’t going to script so it was a case of the onslaught must come, so batten down the hatches and see how we go.

?We managed to contain them until they scored with about 15 minutes to go. But we rode it out and celebrated at the eight-course banquet afterwards!”

Sutton then went on to reach two of the next three finals but were defeated by Triestina in 1980 and then Modena two years later.

But Rains admits winning the competition kickstarted a golden period in the club’s history which saw them reach an FA Trophy Final, win the Isthmian League and then most famously knock Division One Coventry City out of the third round of the FA Cup a decade later.

?It was the beginning of a real good spell for us, although they had previously been in the Amateur Cup Final and won the league.

?We went onto to win promotion to the Conference, got to the FA Trophy final, then that memorable day against Coventry in 1989.

?We also had a couple of cup runs prior to that, losing to

Middlesbrough in extra-time up there, so it was the start of a very good spell for us.?

2. Tony Rains: Tony was an? insurance clerk and goalscorer when Sutton beat Coventry in the FA Cup. He later ran the club’s academy and served as assistant-manager to brother, John. He has been a cab driver for 11 years.

3. Paul McKinnon: A former engineer, Paul is now a director of Camberley Precision and lives in Cobham, Surrey.

4. Micky Joyce: Micky has always worked as an estate agent and is now involved in a lettings agency near Croydon.

5. Dave Collyer: A partner in a sports shop and Sutton’s lottery boss, Dave died after a long illness in June 2006, aged 58, and was a tutor at Chelsea’s academy at the time.

6.Terry Harris: A coal board clerk, Terry went into coaching at Dartford, Enfield and St Albans City and has been at Dagenham & Redbridge since July 2000.

7. Dave Dyer: Dave has been involved in the jewellery trade for many years and is running his own business, Cradlers House, Jewellers, in Leatherhead.

8. Keith Blunt: Keith, a PE teacher, managed Sutton before moving onto Malmo, Viking, the Tottenham youth team and then the FA at Lilleshall before moving to work in China for a decade.

9. Keith Waldon: Another PE teacher, Keith managed Spurs’ youth team to FA Youth Cup glory and was assistant manager of Portsmouth, where he now works as a physiotherapist

10. Martin Clark: Martin was the Coerver Coaching Director for Europe and South Africa for 15 years, but now lives in Georgia, USA, where he runs player and coach development programmes.

11. Gavin Fraser: “Gavin was the third PE teacher in the team and went to live in Jersey. He has worked in the financial services industry for over 25 years and is currently a global sales director.

12. John Rains: John managed a number of Non-League clubs, notably Sutton, and worked in life insurance and the building industry until his untimely death in February 2012, aged 57.

13. Larry Pritchard: A former England amateur international, Larry lives in Epsom and went on? to manage the club. He worked as a senior technician for British Telecom until he retired.

14. Bobby Southam: Now based in Epsom, Surrey, Bobby ran Southam Agencies and is now a director of Furniture Image.

15. Paul Jablonski: Paul worked as an Implementation Manager at Glaxosmythkline before joining the NHS at St.Helier Hospital.