No ambition? You bet I have, says new Salford City arrival Danny Lloyd

The talented 26-year-old attacker was the first of two big signings made by Graham Alexander’s ‘Class of 92’-backed Ammies last week, with striker Adam Rooney also arriving from Scottish Premiership side Aberdeen.

Manchester United legends Gary Neville, Paul Scholes, Ryan Giggs, Phil Neville and Nicky Butt have significantly invested in the club – along with billionaire Peter Lim – since taking over in 2014 when the club were in the NPL Division One North.

Lloyd’s move this week sparked some unsavoury online abuse but the former Colwyn Bay, Tamworth and AFC Fylde man says he had no intention of playing a bit-part at Posh next season.

After a sensational year in the National League North with Stockport County, he moved to Posh this time last summer, quitting his day job at Biffa Waste Management for his first crack at the Football League.

Despite not getting regular game-time at first, he finished with 13 goals and eight assists in 25 starts and was a star performer in their FA Cup third round win against Aston Villa.

And he feels he can get back to the League with his new club. “People are so sceptical,” he told The NLP. “‘Oh, he’s dropped two leagues, he did really well in the Football League, why’s he done that?’ The main reason is, I wasn’t wanted at Peterborough. I wasn’t going to get game time. So why would I want to stay there?

“At the end of my career, what am I going to be happy with? Looking at Wikipedia and saying, ‘Oh yeah, he got X amount of League appearances, but he came off the bench for most of them’. Or am I going to look at my career and say I was part of something and I’ve got something to show for it? That’s what I want.

“People are saying, ‘You’ve got no ambition, you’ve got no desire to play at the highest level you can’. Hang on a minute, not at all. I took the move to Peterborough on no more money than I was earning before. I’ve never played football for money. People think they know the ins and outs when they really don’t.

“Look, if Joe Bloggs is working in a factory and the one down the road offered him extra money a week, he’d be gone. So why is it different for footballers?

“I feel this is the most ambitious move I could have made. I’m backing myself to drop two leagues, be part of a brilliant project and get back to where I was.” 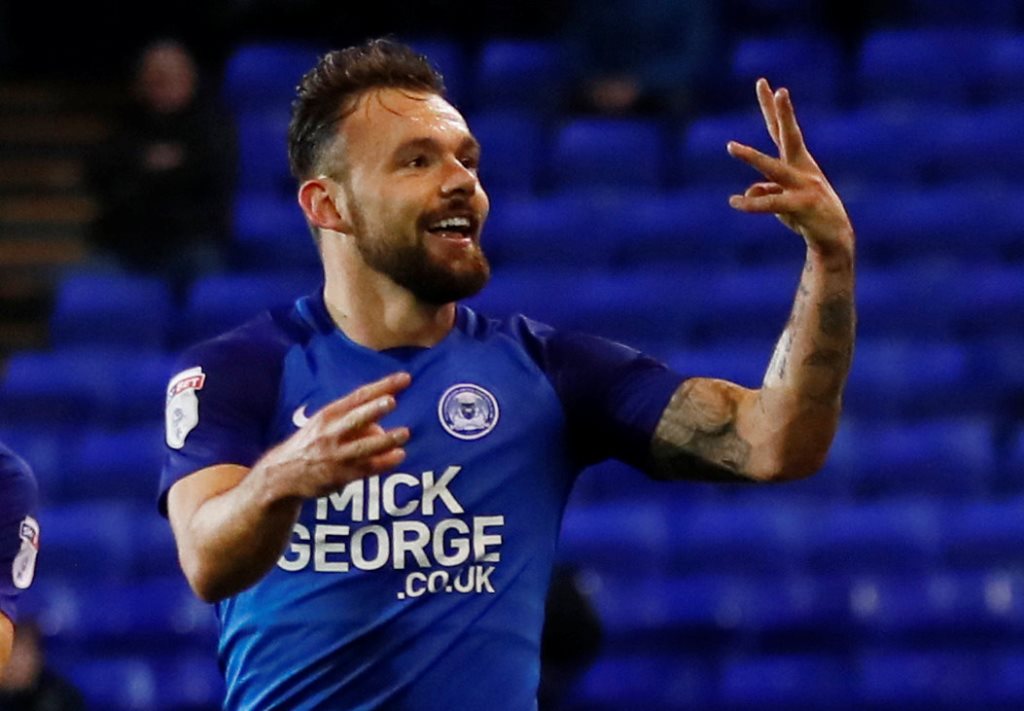 Posh spice: Danny Lloyd enjoyed some happy times at Peterborough last season – but all was not what it seemed (photo: Action Images/Jason Cairnduff)

Following last season’s National League North title triumph, Salford – who parted company with the joint-managers Anthony Johnson and Bernard Morley who guided them from Step 4 to 1 in four seasons – have made a number of high-profile signings.

It’s led to vocal critics of the way they are flexing their financial muscles as they chase a dream place in the Football League.

But Lloyd believes people should look at the bigger impact the club’s famous owners are making rather than the outgoings.

“People batter the owners but they’re not paying as much as everyone thinks,” he added. “They’re doing it bit by bit, like Fleetwood did. I’m sure they got a load of stick as well.

“But what people don’t talk about is the good they’ve done for the community of Salford. They’ve taken a club that wasn’t doing great, didn’t have many fans, they’ve given them a new stadium, they’ve hired people and given people jobs.

“They’ve got an Academy with three age-group teams. All those kids are going to have the chance to make it as a professional footballer. No one ever mentions the good stuff they are doing for the community.

“People just see it as 11 lads playing football and they are getting well paid. No it’s not, it’s about the good they are doing for the community and the young kids in the area. They’re giving them the chance to play football, get a qualification and be around a professional environment.

“And be around coaches like the gaffer, (sporting director) Chris Casper, the owners, who they can learn from. Since I’ve been in, I’ve met some really good people and seen some really good kids.”

Despite Lloyd’s shock departure from Peterborough – with Posh chairman Darragh MacAnthony also weighing in on twitter – he says the club will always hold special memories.

“The majority of the fans were exemplary with me. They’re an unbelievable core of fans. Now it’s a new challenge for me. I just want to let my feet do the talking.”