Posted on 8th October 2019 by admin in Latest News, National League with 0 Comments 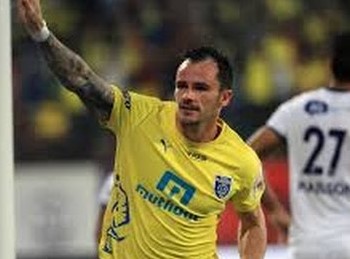 Former Bury, Crewe Alexandra, Rochdale and Tranmere Rovers striker Chris Dagnall will be hoping for a dream start in the National League at Yeovil tonight.

Signed to boost his attacking options until the end of the campaign by September’s MANarama National League manager of the month Sarrll, the forward brings a wealth of experience to Somerset.

He also boast a history of scoring goals consistently wherever he’s played. At Tranmere Rovers, the Liverpool-born star won promotion from League Two via the play-offs with the Merseysiders last season.

In 491 Football League appearances since making his debut for Tranmere in 2003, the 33-year-old has bagged 121 goals.

His four years at Rochdale proved to be the most productive, Dagnall netting 54 goals in 140 appearances.

Following that, he enjoyed successful spells at a number of clubs, most notably at Leyton Orient and Crewe. At the latter he bagged 21 goals in 74 appearances and 18 more in 60 outings at the former.