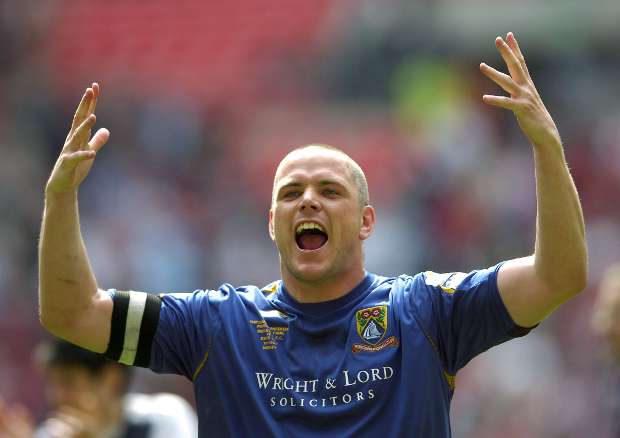 Jim Bentley is set be unveiled as AFC Fylde’s new manager after standing down as Morecambe boss.

The longest-serving manager in England’s top four divisions, pictured, ended his 17-year association with the Shrimps on Monday morning,

Both BBC Radio Lancashire and local media are reporting that the 43-year-old Bentley will be named as the successor to Dave Challinor by the Coasters following his exit earlier this month.

Bentley, who joined Morecambe as a player in 2002, succeeded Sammy Mcilroy as manager in May 2011 after skippering the club into the Football League.

AFC Fylde’s League Two neighbours confirmed Bentley’s departure for a new “challenge” and wished him well in a club statement.

The Shrimps said: “It is with great reluctance that we have accepted the resignation of Jim Bentley today. Jim has stated his desire to take on a new challenge and it is only right that we honour his wish after the service he has given this club.

“He has been an amazing servant for us as player, captain and manager and has deservedly gained a fantastic reputation throughout the game for what he has achieved with the club.

“We cannot thank him enough for his contribution to the club over the years and it goes without saying he will always be welcome at the Globe Arena.

“Jim’s name is synonymous with Morecambe and he has always had the very best interests of the club at heart, playing and managing with great pride, honour and integrity and he departs with the best wishes of everyone connected with the Shrimps.”

The statement added: “Our efforts are now focused on appointing a new manager as soon as possible and that process starts immediately, with a caretaker manager to be announced later this week.”

Challinor became the third National League boss to get the chop in three days when he was sacked on Saturday 12 October after Ebbsfleet terminated Garry Hill’s contract and Hartlepool United dispensed with the services of Craig Hignett.

Pictured putting pen-to-paper on a three year contract extension running until 2021 in June 2018, Challinor oversaw three promotions since arriving from Colwyn Bay in November 2011, including masterminding the Coasters rise to the National League as National League North champions in 2016/17.