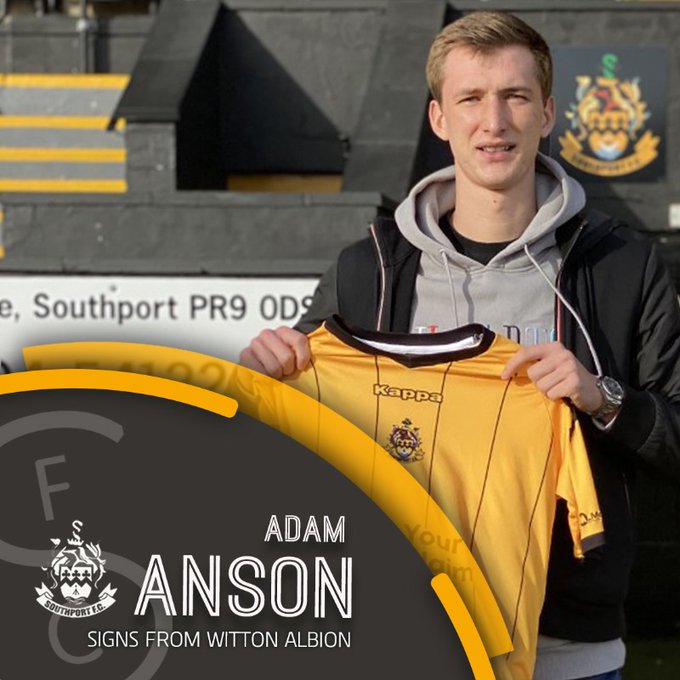 The NPL Premier Division club will collect their first fee since Danny Andrews switched to Colywn Bay in 2016 after the National League North agreed to pay an undisclosed figure for the central defender, pictured.

According to a club statement, the 22-year-old isn’t leaving immediately after signing a contract running until to May 2022.

Instead, he will stay with Albion on loan from the Sandgrounders until the end of February and is available to face Stafford Rangers in the NPL’s top flight on Saturday.

Witton Albion chairman John Salmon said: “Adam was a Contract player with a release clause. “The Southport FC offer exceeded this figure and, whilst we do not want to sell our best players, we will never stand in any player’s way if they want to play at a higher level.”

Anson has been at the heart of the Witton defence since arriving in the summer from Chorley after two years with the Magpies and helping them win promotion from National League North in 2018/19.

On the books of both Blackburn Rovers and Liverpool as a youngster, he kicked off his senior career with Wigan Athletic and had made 33 appearances before agreeing to the move.

? We’re looking forward to having @97AdamAnson with the club!

Manager Liam Watson told Southport’s website: “Adam is a great signing for the club and a player I have been after for a while. As a player, he has exactly the type of profile we are looking for and he will have a very bright future in the game.

“He is keen to join the club but I have agreed with Carl Macauley, the Witton manager, that he can stay with Witton until the end of February before joining up with us here.”