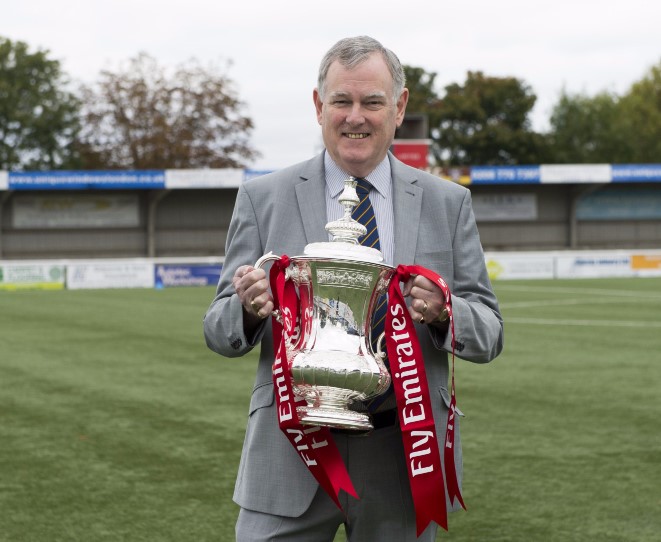 Elliott, pictured with the FA Cup last season, aired his fears for football in London’s Evening Standard on Monday, only hours before the Government changed its advice on fighting the global pandemic at teatime and the National League called a halt to the season.

A crowd of 2,126 were at Gander Green Lane on Saturday as Sutton drew 1-1 against Hartlepool and Elliott admits the financial implications for Non-League and all of football is a major concern if that turns out to be the last game played for months.

“It would be a very frightening time,” Elliott told Monday’s Standard Sport. “The government advise people on what to do which is why I was reasonably comfortable with playing on Saturday because the advice is to carry on as normal unless you are affected by it.

“This is such a community club, that is the other factor people don’t seem to have remembered. We have 40 teams playing here now: girls, boys, women’s and disability sides. The effect on all of these if the club were closed down and we weren’t able to use the 3G facility [artificial pitch] will be enormous.”

Like Non-League chairman across the country, losing gate receipts is one on Elliott’s biggest fears.

He added: “If we lose just gate receipts, that is going to have a big effect,” he said. “What would have as big an effect is losing the income from our 3G pitch and social facilities. If everything closed down, there would be huge financial implications.”

The Vanarama National League was officially suspended soon after 5.30pm, three days after league bosses decided to play over the weekend and despite the Premier League and English Football League suspending their matches until April 3.

The Northern Premier League also suspended their season until further notice on Monday afternoon as Britain’s battle against the coronavirus continues to escalate.

Official Statement regarding the suspension of the #BetVictorNPL

The competition’s annual players’ awards in April was also cancelled and the NPL Football Academy suspended until further notice.

The National League and the NPL broke ranks with the Southern League and Isthmian League on Friday by not suspending their campaigns as sport was decimated by the public health crisis.

The competitions had been taking a joint approach to the public health crisis caused by the coronavirus outbreak since meeting with the Football Association and other Non-League competitions last Wednesday.