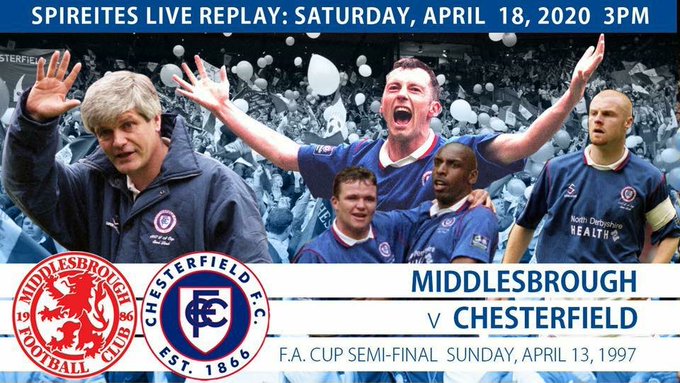 Chesterfield are helping their fans forget about the coronavirus lockdown today by re-running their 1997 FA Cup semi-final classic against Middlesbrough!

The Spireites are live streaming the 3-3 draw at Old Trafford on their YouTube channel from 3pm, 23 years after the then Second Division club came so close to reaching the FA Cup Final. To this day, no club from the third tier or below has ever achieved the feat.

Widely rated as one of the competition’s all-time classic ties against a Boro side featuring Italian international and Champions League winner Fabrizio Ravanelli, the game featured extra-time drama, one red card and a major refereeing controversy when an official failed to spot the ball cross the line for a goal.

The Spireites said: “We’ll kick-off at 3pm and show the whole match. Previous live streams of classic matches have attracted four-figure audiences and this is expected to be similarly well received.

The live stream on our YouTube channel channel is now active – click here for the build up: https://t.co/dCBkJBGiK2 pic.twitter.com/hfRhO8X1VJ

“If you were at Old Trafford, we’d love to feature your memories after the match has ended. Please use your smartphone/tablet to record a short video and email it to media@chesterfield-fc.co.uk.”

Make sure you get your copy of The Non-League Paper this weekend for the latest news on the impact of the coronavirus crisis on football after Step 3 & 4 sponsors BetVictor announced they were terminating their title sponsorship last weekend and the National League’s clubs prepare for historic votes on how to conclude their suspended campaigns.