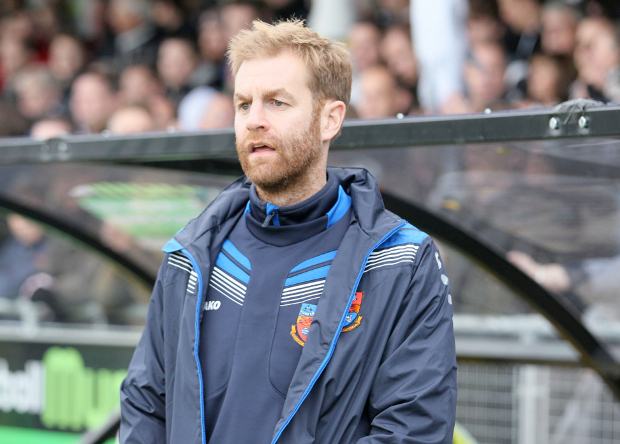 HARROGATE TOWN boss Simon Weaver says he has had the stuffing knocked out of him following another serious injury to midfielder Lloyd Kerry.

Kerry was injured in Saturday’s National League North game against Chorley and after brief treatment at the club’s CNG Stadium, he was taken to hospital on Monday for a scan.

Unfortunately it confirmed the club and Kerry’s worst fears, showing that the ex-Sheffield United, Chesterfield, Hinckley and Tamworth man had ruptured his anterior cruciate ligament (ACL).

Kerry will now have surgery after having his season prematurely cut short and faces a long road back to fitness with the club saying he could be out for nine months.

It’s the second time he has received a bad injury this season. At the beginning of the campaign, he missed three months of action after a double fracture to his cheekbone, and subsequent fractures to his eye-socket during a game against FC Halifax Town.

Boss Weaver was understandably knocked back by the news, telling Harrogate’s website: “It’s incredibly disappointing that Lloyd has suffered an injury like this.

“He’s had incredibly bad luck this year, and your heart goes out to the player and his family.

“Seeing Lloyd leave the field on a stretcher on Saturday really knocked the stuffing out of me and everyone else involved at the club.

“As always, it’s important to do what is right for the player in these instances, and rather than speculate on the severity of his injury, we’ve been able to get him scanned at the earliest possible opportunity.

“The news which came through this afternoon has confirmed our fears, but I am grateful that we have been able to move this quickly to start Lloyd’s rehabilitation process.”