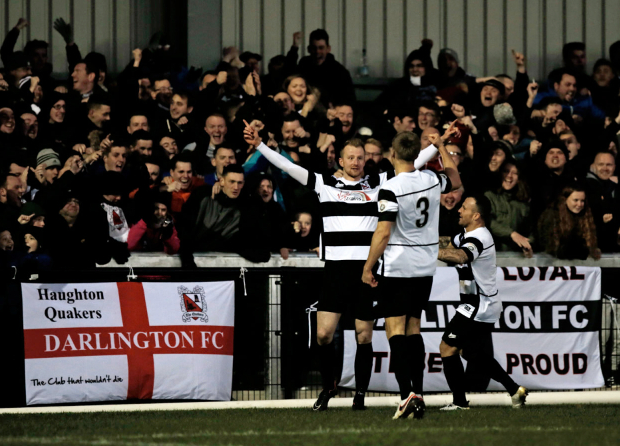 FEARS have been raised over whether Darlington would be able to compete in the National League North play-offs if they finish in the top five.

Rumours circulated over the weekend that the Quakers might not be allowed to take part in the end of season showdown as their Blackwell Meadows home may fall short of the minimum requirements.

Darlo moved into the ground, which they share with Darlington Rugby Club, at the end of last year after it was passed fit to host Step 2 football.

All National League North and South sides require a Grade B from the Football Association to compete in the division.

However, higher requirements are needed if you wish to win promotion to Non-League’s top tier or compete in the play-offs.

For example, only 250 covered seats are required to gain the Grade B but 500 are needed by March 31 if you wish to try and win promotion.

The FA’s ground grading rules state: “To qualify for promotion to the National League by winning the respective North/South Championship and for the club to participate in the promotion play-off matches, the ground must achieve a Category “B” Grading together with 500 seats under cover by 31st March in each season. These seats may be in two stands, with no stand having less than 100 seats.”

It read: “The board of Darlington FC is aware of rumours concerning whether Blackwell Meadows meets the grading requirements to allow the club to complete in the National League play-offs.

“Discussions are continuing with the National League and fans will be informed as soon as a decision is taken by the League. The club will make no further comment until then on any of its media outlets.”