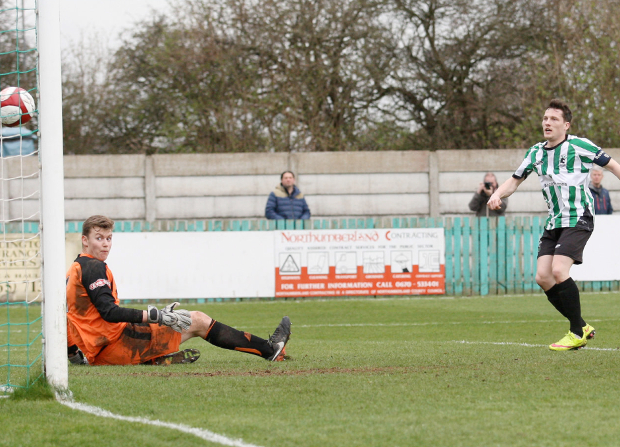 BLYTH SPARTANS boss Alun Armstrong says re-signing “one of a kind” Dan Maguire is crucial after the club’s star striker turned down a move to Gateshead.

Maguire, who was named the Step 3&4 Player of the Year at our National Game Awards on Wednesday, scored 30 league goals for the Spartans last year as they won the Evo-Stik NPL Premier and Northumberland Senior Cup.

The 24-year-old’s performances in helping Blyth return to Step 2 got people talking and the club say he was offered a “lucrative deal” to move into the National League with Gateshead.

However, Maguire has opted to remain with Blyth and boss Armstrong was understandably delighted, especially after losing another striker, son Luke, to Middlesbrough.

Armstrong, who agreed a new one-year deal himself, told the club’s website: “As soon as I signed my contract, the main thing for me was getting ‘Nipa’ sorted. We had to make sure he stayed.

“That’s no disrespect to any of the other lads, but we’d already lost Luke to Middlesbrough. It’s hard enough to lose one of them, but trying to replace both of them – and the 60-odd goals they scored between them last season – would have been tough.

“So, I was chuffed to bits when I got the phone call off him to say that he’s going to stay for another season. We’ll see where we go from there but, if he does what he did last year, I wouldn’t expect to hold on to him for much longer, to be honest – as I know for a fact that the bigger clubs will come sniffing again, without a doubt.

“We have a great group at Blyth and he’s known the lads for a long time. Everyone knows how he plays and they know he’s a nightmare in training sometimes, but we need to build a team around him because he’s one of a kind and players like him don’t come around too often.”