Big Interview: The numbers are starting to add up now for Darlington midfielder Dave Syers

Posted on 28th July 2017 by admin in National League North & South, The Big Interview with 0 Comments 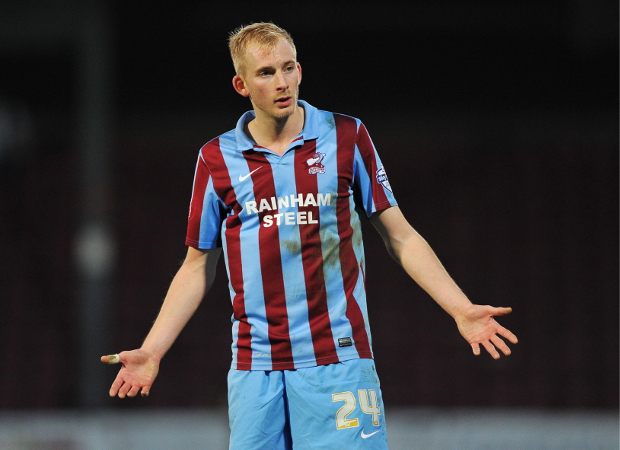 ACCOUNTANCY? Or professional football? For most people, the choice would be pretty simple.

Yet 12 months after abandoning childhood dreams for a life of tax codes, invoices and end-of-term assessments, Darlington’s Dave Syers couldn’t be happier.

“Working full-time, doing exams, training and playing, having a wife and young daughter – it’s been full on,” admits the former Bradford City, Scunthorpe and Rochdale midfielder. “Certainly compared to full-time football, when you’re on the couch by mid-afternoon!

“But it’s strange. Playing for Farsley and Harrogate growing up, football was always something I did as a hobby, for fun.

“Then I joined Bradford at 23 and suddenly it was a full-time career. Which is the best thing in the world when things are going well, but when you’re struggling with injuries or out of favour like I was at Scunny, you start to almost resent the whole business.

“Without a doubt, my enjoyment of football has suffered in the past few years. So to have it back as more of a hobby, to play regularly for Darlo – it reminds you why you loved the game in the first place. I’m happier on a pitch now than I have been for a long time.”

Syers is far from your typical ex-pro. A trainee at Leeds and Nottingham Forest in his teens, a string of injuries convinced the Yorkshireman that his future lay in further education.

So he studied Classics at Leeds University while playing part-time with the likes of Ossett Town and Farsley. Syers also played cricket for Yorkshire U19s where he was a team-mate of England international Adil Rashid.

After graduating with a 2:1, he was offered a job by blue-chip accountancy firm PricewaterhouseCoopers in 2010, only for Bradford to make an offer he couldn’t refuse.

“A desk job isn’t age dependent, but you only get one chance to become a pro footballer,” he explains. “Even if I didn’t make it, I could always say I’d given it a go.”

Syers did make it, winning the Bantams’ Player of the Year award in his first season, a League One title at Doncaster in 2013 and promotion from League Two with Scunthorpe a year later.

“It will always be something I look back on proudly,” says the 29-year-old. “But as someone who never planned to be a professional footballer, I was always thinking about the get out.

“I’d had a couple of bad years with injury, then got released by Rochdale. At that stage, I still said to myself, ‘I’ll take whatever’s offered to stay full-time, prove my fitness and show I can do it’. I was only 28, after all.

“But the reality was that the game has changed at that level. In League One and Two, squads are getting smaller. They’re also getting younger. A lot of the money that was once set aside for older pros is gone, especially if you haven’t played much over the previous two years.

“The more I thought about it, the more I realised it was probably better to drop down now. That way, I’d be able to offer more to a Non-League club and start building a new career earlier in life.

“By 32 to 33, when most lads are finishing and wondering what comes next, I’ll be a chartered accountant, still playing football at a decent level and well set.”

Syers – who lives in Wetherby with wife Hannah – briefly joined Guiseley, then moved to Darlington in October 2016.

At the same time, he was taken on as a trainee accountant by Leeds-based firm Sochall Smith.

“I work full-time, then get time off to attend courses,” he explains. “You sit exams for the first three years and after that you’re a chartered accountant.

“I’m just coming up to a year. There’s 15 exams in total and I’ve done six so far. The next two are in September, so I’ll be starting the revision again next month.

“I could’ve started the next level in June if I wanted to, but it’s hard enough working full-time and playing football. I said to myself that I’d do everything between September and March then have the summer off for some family time. It’s been nice to relax.”

“A lot of the lads are self-employed,” he laughs. “So yeah, I always speak to them and try to help out if I can. Free of charge obviously!”

“I’ve had two promotions but never been in the play-offs,” says Syers. “It would have been a big thing for me, so it was obviously disappointing. All of us finished the season with a bitter taste.

“But at least it’s pushed the club forward. They’ve relaid the pitch and put the groundwork in for the 200 covered seats we need. The deadline is end of March and I think they’re supposed to be done by Christmas.

“Which is all very well, but there’s just the small issue of us actually getting into the play-off places again!”

Chief amongst many rivals will be big-spending Salford City, though Syers has issued a note of caution.

“It’s hard to look beyond Salford after the money they’ve spent,” he adds. “But that can go either way. They’ve got rid of a lot of the lads who’ve done well for them over the years and got them to where they are.

“It’s that gamble of signing people who’ve maybe never played this level before. It’s all well and good playing at home, but some of the places you go are tough and doing it Saturday-Tuesday-Saturday… it remains to be seen if they cope.

“Most people put them as favourites – myself included – and that’s something they have to live up to now.”

If Salford opted to twist, Darlo certainly stuck. Dover striker James Caton and Fylde defender Dom Collins are the only arrivals this summer, though more are expected.

“That’s one of the things that Martin has done really well,” says Syers. “He’s been very loyal to the players that took Darlo up from the Northern League.

“There’s a good, strong team spirit there and there has to be – we’re relying on that if we want to compete against teams who are full-time with much, much bigger budgets.

“It will be tough, but I’ll enjoy it – even when the exams start up again!”