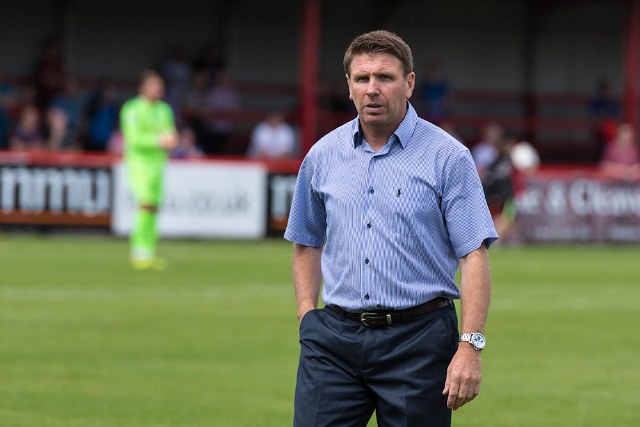 York City aren’t exactly flush – but at least gaffer Martin Gray won’t be paying the players out of his own pocket!

Gray, 46, was headhunted by the Minstermen last season after leading Darlington to three promotions in as many years.

But back in 2012, when the Quakers rose from the rubble of administration and a four-tier demotion, the former Sunderland midfielder was doing a lot more than simply managing the first team.

“I gave an awful lot to that club,” said Gray, who spent almost 18 years at Darlo as player, coach and manager.

“I made massive sacrifices – personal and financial. I put a lot of my own money in to make it work in those early days, just to ensure players got the right deals.

“Back then, it was my business that funded things. That’s never been brought to the table before, but it’s true.”

Despite his achievements –and his input – there is little affection for Gray amongst Darlington’s directors, who claim he left the fan-owned club over budget. In an interview with The NLP last week, new Quakers boss Tommy Wright even said he was ordered to sell several of the club’s high earners after replacing Gray in October.

The accusations rankle, but Gray says he is unwilling to engage in a war of words with his former employers.

“I would never do that,” he insists. “And I wish everyone at Darlo good luck. I really do. Football is a tight community and I’d never burn my bridges with anyone. Sunderland, Oxford, Aldershot – I still care about all of my old clubs.

“Listen, I know hand on heart that the club wouldn’t be where it is without the players I brought in over the past five or six years. The commitment, the desire, the professionalism – that was something very unique at those levels. On the back of that we got great success and became a real beacon of the community. But I was committed to getting that club back into the League.

“I really did try and give all my energy to make that happen but, without an owner or a backer, I just felt Darlington didn’t allow me to fulfil that commitment. York did. In the end, it was probably best for both parties that we went our separate ways.”

As in 2012, Gray found a rich and historied club at a bleak nadir. Consecutive relegations, an FA Cup exit to South Shields and a humbling defeat to neighbours Harrogate left the Minstermen as the lowest-ranked professional club in England.

Worse yet, the club’s own financial consultant revealed a funding black hole of over £1m since relegation from the EFL and warned of a “challenging” 2017-18 campaign.

With a stadium move still 12 months away and owner Jason McGill keen to sell up, it didn’t look quite the opportunity Gray had envisioned in October.

Now, however, McGill is back at the helm and committed to funding a promotion push. Gray has signed eight players, with former York skipper Russ Penn amongst four purloined from National League side Gateshead. And the ambition – once again – is the National League North title.

“We’re here to win the championship,” said Gray. “That’s our only target and that’s what’s expected – inside the club and outside. We have to get out of this league. Luckily, we’ve got a budget that’s very competitive and will allow us to do that.

“The chairman has been here for years and he’s been outstanding ever since I walked through the door.

“He’s backed us fantastically well and he’s delivered on everything he promised. I’m really relieved that he’s stayed with us. Without a steady owner who knows the business, nobody will be successful. That was the reason I came in the first place.”

Though the club he inherited was down-at-heel, Gray is glad he arrived mid-season. “You learn a lot more that way,” he adds. “That’s one thing I gauged. In those six months, you find out a lot about people and you get a clear idea of what the clubs needs.”

Chiefly, strikers. York were outscored by ten sides last term and, while 36-year-old veteran Jon Parkin hit 25, only one other player netted more than twice.

“Jon’s a top player,” said Gray. “He’s 36, into his 20th pre-season. I take my hat off to him. He never misses a session, still works hard. He’s just got that hunger to play football which is an example to everyone.

“But we relied too heavily on him last season. We gave ourselves a real chance at the play-offs but unfortunately Jon got injured, missed the back end of the season and we had nobody to back him up. I didn’t want that to happen again.”

Nor the booing and frustration which marred a lacklustre run-in, especially with that long-awaited move to a new home in Monk’s Cross around the corner.

“Expectations are perfectly natural with a club of this size,” says Gray. “And the fanbase in York is fantastic. It’s so strong.

“Yes, you can ask for patience and understanding. But it doesn’t matter whether you’re in charge of York City or England – success is what pulls in the punters and lifts the mood. It happened at Darlington and I want to bring that here.

“Like I say, we’ve got the budget. We’ve got the players. Now it’s down to us to give every ounce of ourselves.
“Going into a new league, in a new stadium – what more could you ask for as motivation? If that happens, this club could really kick on again.”