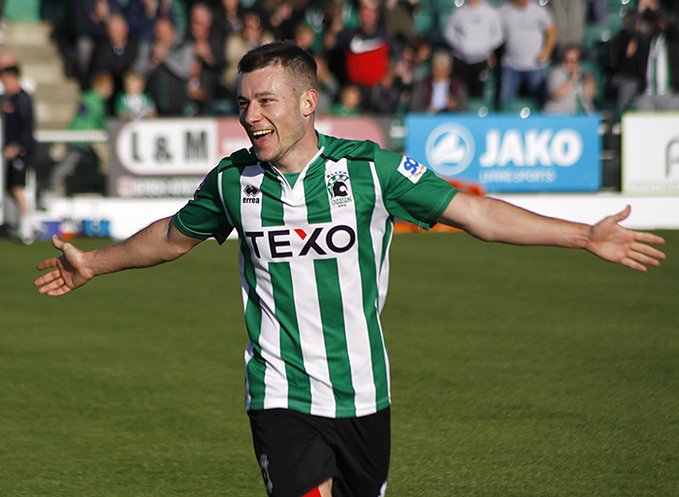 Callum Roberts has told Blyth Spartans they helped him fall back in love football after moving on to Notts County for an undisclosed fee.

The former Newcastle United academy graduate, pictured, switched to the National League on Monday after being signed by Spartans boss Lee Clarke in the summer.

With a ratio of one goal every game – including hat-tricks against Curzon Ashton and AFC Telford United – the 22-year-old left Northumberland with a magnificent record of 17 goals in 25 games.

Taking to social media to thank Spartans’ fans for their support, Roberts said: “Sadly my time at the club has come to an end.

“I can’t thank everyone associated with the club enough for what they have done for me in the past few months! For making me find my love back for the game and getting me back to my best.

“From the management of Lee, Paul, Neash and Rob, to the legend kit man Peter, the players and of course the supporters, I can’t thank you all enough.

“I will be a fan for life and wish you well for the rest of the season. Thank you and goodbye.”

Roberts made his final appearance in last weekend’s 2-1 win over Curzon Ashton and Spartans boss Lee Clarke was full of praise for the goal-scoring winger in a statement confirming his departure.

Clark said: “Obviously I knew this day was going to be coming, obviously I didn’t want it to be as quickly as it has. But as I said all along, we got a player, with no disrespect to the league, was too good for the level.

“It was because of my close relationship with him and that he was a local lad to the club that we got him in in the first place.

“Obviously the form he showed was just sensational and it was always going to attract attention.

“In regards to the club he’s going to, in the league they are playing in, I think Callum is even too good for the league above.

“I understand the reason he’s chosen Notts County because they are a club that’s probably in the wrong division.

“Now they are under new ownership, they look like they are on a sound foot now. It could be a club which goes up through the leagues very quickly, possibly Championship level.

“It’s a huge football club, it’s got great support even for the level they are at at the moment they still get good crowds and obviously it’s got a lot of history.

“I understand the reasons for going to that type of club but I still think for the level above he’s too good for that as well and hopefully he goes to Notts County and proves that.”

Make sure you get your copy of The Non-League Paper on Sunday for the latest news from across Non-League over the last seven days, together with exclusive match reports and pictures from all of Saturday’s upcoming action in the Vanarama National League.