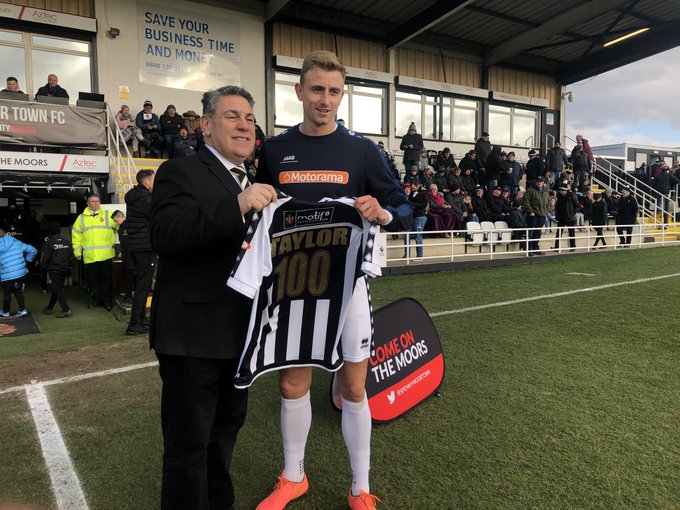 Glen Taylor is determined to smash the all-time goalscoring record at Spennymoor Town in short order after reaching a century of goals for the National League North club.

The 29-year-old striker bagged his 100th goal in his 200th appearance for the Moors in their 2-1 win at Gloucester City on the first Saturday of the month to further engrain himself in club folklore.

Taylor, an FA Vase winner with Whitley Bay, has won two promotions with Spennymoor Town since joining in 2016 and was named the National League North player of the season last term.

He’s been a key figure in their success under manager Jason Ainsley – and Taylor is now aiming to make more history, but at the expense of his teammate Gavin Cogdon, the club’s record goalscorer with 132.

“I did joke after the game I’m now coming after Cogden but I genuinely am!” Taylor told The Non-League Paper this week.

“Titch [Cogden] is classed as a club legend and rightly so for what he has achieved at the club so if I can end up on more goals than him it would be great.

“I’m targeting 150 now and would like to think I’d nearly be there at the end of next season.

“I’m really proud of the record. I don’t think I’m your typical goal scorer as I think the type of forward I am, I offer a lot more than just goals, so to provide 100 in 200 is a great feeling.”

Taylor signed a new two-year contract with the club this time last year and told The NLP’s readers that playing part-time suits his work-life agenda.

“My life still has great balance and I’ve never been happier with all aspects of my life so I’d be mad to disrupt that but I suppose you can never say never,” declared Taylor, pictured receiving a special shirt to commemorate his milestone 100th goal for the Moors.

“I’d like to finish my playing career at Spennymoor and hopefully reach 200 goals in the process.”