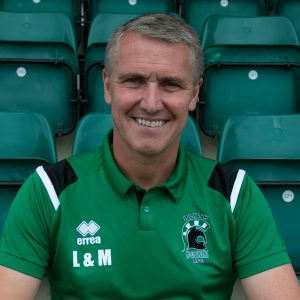 Former Hartlepool United defender Michael Nelson has taken charge of Blyth Spartans until the end of the season after the relegation-threatened National League North club parted company with Lee Clark.

The departure of former Newcastle United favourite Clark, pictured, and his number two Paul Stephenson by ‘mutual consent’ was announced at lunchtime on Wednesday.

Clark succeeded Alun Armstrong at the second-from-bottom Spartans in June 2019 after he ended a successful three-year reign at Croft Park to join North East neighbours Darlington.

Clark’s exit came after a run of six straight defeats since his side’s last success, a 1-0 win at Kidderminster Harriers at the start of January.

Nelson made a surprise return to playing last week when he penned a short-term deal with Spartans having announced his retirement this season to start coaching at League Two Stevenage.

A Blyth Spartans statement read: “It is with regret that Blyth Spartans announce that manager Lee Clark and assistant Paul Stephenson have left the club by mutual consent.

“We would like to thank Lee and Paul for all their efforts and professionalism during their time at the club.

“Michael Nelson will take charge of team affairs for the remainder of this season.”