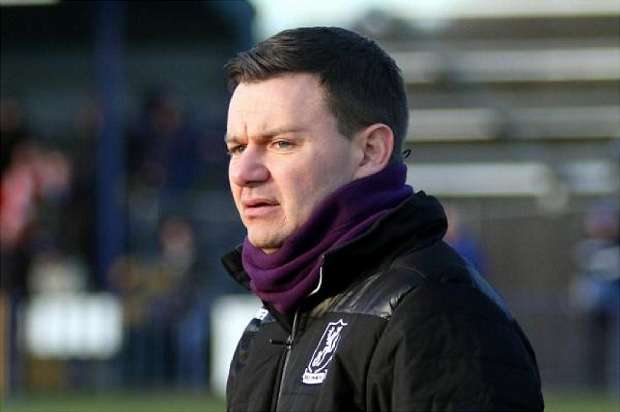 Bradley Quinton reckons Welling United are are a long way from giving up on making a late charge for the play-offs after turning their fortunes around inside two months.

The Wings are now the in-form team in National League South having been in freefall and  sitting outside the relegation zone on goal difference alone when he took over at the start of January.

Quinton, pictured, haS tasted defeat only twice in his eight games in charge so far ahead of this weekend’s action and a trip to Maidstone United to significantly ease worries of an unthinkable drop to Step 3.

“We’ve increased the training methods and style of play,” he told The Non League-Paper this week before his side’s clash with Havant & Waterlooville last Saturday fell foul of the weather.

Manager Interview | The gaffer @bobbyquinton spoke to WUFC TV ahead of the Kent derby at the weekend ??https://t.co/1QtQTom9Xx

“I’ve introduced GPS monitoring which they wear during games and training. Not as Big Brother thing but to see their health and heat maps of where they should be hitting.

“It’s increasing their workload and their capability of improving their game, that’s something I like to do. The players have understood that and understood my game plan of how we want to be when we are in possession and out of possession.

“We’re clearly doing something really well but it’s down to the players buying into what I’ve asked them to do. They’re enjoying their football, they seem a lot healthier and don’t want to come off the training pitch.”

Quinton himself is also rejuvenated following a 14-month spell out of the dugout after he left Braintree Town, who he guided to an unlikely promotion in 2018 through the National South play-offs.

“I’ve got two young boys who are great and the missus is good, but she got to the point where she was saying, ‘I think you’re missing it now’,” he said. “When you’ve got your other half telling you to get back in and do something you’re good at, you appreciate that.

“It’s great to be back and looking forward to every training session, and when we haven’t got a game in midweek, watching games and in the das going into the pro game and watching U23s.

“I didn’t want to rush things. There were jobs that became available. I know what I can do if we’re given the right tools and having the right people around, that was something that got reassured to me by Mark [Goldberg, chairman].”

Up-and-coming Quinton is already well-respected in the game and with his freshly motivated squad, he’s not ruling out a dramatic end to the season.

He added: “When we were at Braintree and got promoted, we finished with nine wins out of ten. Then we won the quarter-final and semi-final 1-0 and the final on penalties. It’s something we’re capable of doing.

“I will encourage the boys to keep their feet on the ground but along the way you just never know.”