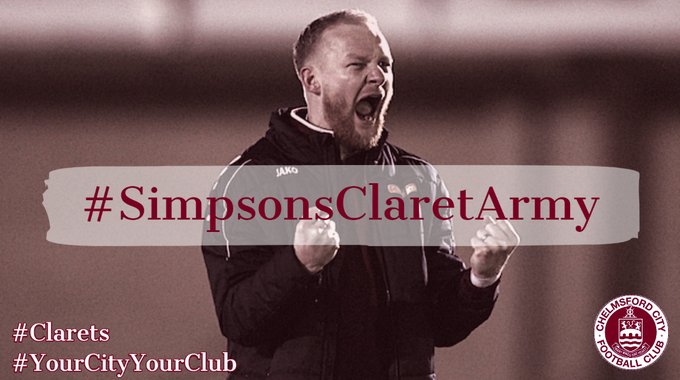 National League South Chelmsford City have appointed Robbie Simpson as their new first-team manager after a successful spell as caretaker.

The Clarets are unbeaten in four and have yet to be defeated at home since the striker took temporary charge in late January following the departure of long-serving Rod Stringer.

Simpson, pictured, will continue to play and carry on the work he started at the begining of the season when he helped to create the Essex club’s new academy.

Simpson, pictured, told the club’s website: “I feel very proud to be appointed as the new manager.

Chelmsford City Football Club is delighted to announce the appointment of @RobbieSimmo as our new First Team Manager!

“I think this club has fantastic potential and I am really looking forward to playing my part in the next phase of the journey towards being a truly successful ‘community’ vlub.

“I’m very passionate about the Academy and I want to continue giving youngsters a chance.”

Sitting tenth in Vanarama National League South, Chelmsford City are six points away from the play-off places with a game in hand.

His predecessor Stringer told The NLP he is still hungry for his next challenge two weeks ago, calling his axing a non-football decision.

He left with the Clarets seven points adrift of the play-off spots before Simpson installed as interim manager soon afterwards.

“It looks like they’ve been waiting for an excuse to get rid of me,” Stringer told The NLP.

Make sure you get your copy of The Non-League Paper on a Sunday for the latest news and action from across Non-League over the last seven days.