Posted on 14th May 2020 by admin in Latest News, National League North & South with 0 Comments 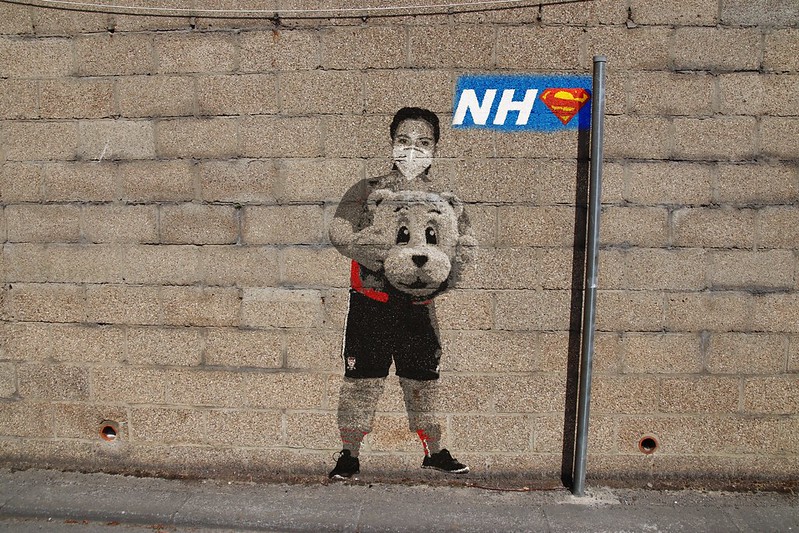 Currently furloughed along with rest of the National League North club’s staff, the MInstermen fan and former programme editor for Blyth Spartans has come clean about being the source behind mysterious Banksy-style street art supposedly appearing around Bootham Crescent.

Looking too good to be true, the series of ‘photographs’ showing stencilled artworks linked to York turned out to be some clever Photoshop work by Simmonite who’s been posing as street photographer Christopher Etinomis!

Sent to The Non-League Paper and media throughout the region, the images were attracting growing interest across the city before he held his hands up to the prank and put the prints up for sale on e-bay to raise money for the York Teaching Hospital Charity.

Simmonite made his confession on Radio York, telling listeners on Tuesday: “As many people know everyone at York City FC have been furloughed since April 1st. I’ve been bored out of my mind during this time so I decided to have a little fun and try to convince the people of York that we had Banksy murals appear at Bootham Crescent with help from Photoshop.

“It was always my plan to add a charitable angle to this if it took off and I’ve ordered one of a kind canvases of the photographs to sell individually via an auction. 100 per cent of the proceeds will go towards the York Teaching Hospital Charity. At the moment it’s raised over £300 in just an hour.

“Like actual Banksy, the photos have a bit of meaning to them and the NHS one is actually my girlfriend’s face Photoshopped onto Yorkie’s body. She is a nurse at the hospital and alongside her colleagues is doing a fantastic job during this pandemic.

“I thought it was a nice gesture to make and I’d like to donate a canvas to the hospital to hang up as well. I hope this gave some people a distraction from what is happening in the world at the moment with a bit of light-hearted humour.

“It’s important to stay positive during this time and I’m glad it wasn’t taken too seriously. Bootham Crescent is still alive and kicking and I’m excited to get back to work soon and help give it the send off it deserves. Hopefully in the National League.”

For more news like this make sure you get your copy of The Non-League Paper from this weekend!

In shops on Sundays and Mondays, The NLP has been available as a page-rustling digital edition and full replica of the printed paper since midnight on Saturday.

Try the digital paper for free today with our first paper in May only a few clicks away right now as a FREE SAMPLE EDITION! Digital readers also save cash on single issues, even more on longer deals and also enjoy full access to The NLP’s archive.

Image courtesy of The Non-League Paper, blythspartans.com and Dan Simmonite