Posted on 16th September 2015 by Sam Elliott in National League South, The Big Interview with 0 Comments 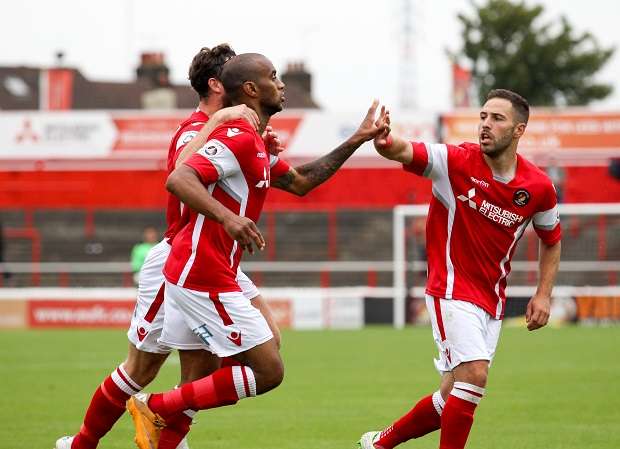 IF you were to believe what you read, Ebbsfleet United are already as good as National League South champions. Not the views of mischievous journalists or an ambitious entry laced with bitterness on a newspapers’ letters’ page, you understand.

More the opinion of the captain of one of the club’s rivals. It’s often been said Dartford skipper Elliot Bradbrook knows how to pick his moments.

Making full use his slot in the Darts’ matchday programme, he reserved words for the visiting sides. The usual welcoming pre-match pleasantries on Bank Holiday Monday were put to one side.

Ebbsfleet should not drop a single point this season, came the kidology. Shots fired, but the well-backed Fleet have heard it all before.

But now, they’re taking on a man who dines with the very best mind-game player in the business.

Daryl McMahon, the Fleet’s 31-year-old manager, has a lot going for him, not just a job where money is no object. The fact that he’s talked tactics with Jose Mourinho and listened to what makes him tick over lunch is just a side order.

“I was surprised to read that before the Dartford game,” he said as we sat down to fill his spare half hour between the first team’s training session and the start of the club’s Academy match.

“He (Bradbrook) has been a good player, he’s their captain – it was more of a dig about us and trying to put the pressure on my players than anything else.

“Everyone has said the same old stuff about us, and really it just becomes boring now. So boring. It’s not respecting the rest of the competition.

“As a player here I’ve been through it for the past two years here; opposition players, fans and managers saying whatever they want to say. No we just accept it and in all honesty we’re no longer bothered by talk in the press and the media about money.

“You can’t stop people talking about the same old thing, so what’s the point in paying it attention or getting upset?”

The elephant’s already in the room. There’s an acceptance that whatever Ebbsfleet go on to do this season, a ‘yeah, but’ will always shadow any achievements. Few care that the Kuwaiti cash of Dr Abdulla Al-Humaidi saved them for closure in 2013, more concerned that it’s holding up a club with some players widely understood to be taking home more than £2,000 a week in a mainly semi-professional division; facts which get punters flooding to the bookies.

The thing is, they have had a bottomless pit of money since June 2013. Last year they finished eighth, ten points from the play-offs. It didn’t work for Steve Brown or Jamie Day, but something the Irishman is doing seems to be working.

So what’s different this time around for a club who before yesterday’s battle with fellow flush Kent club Margate had taken 19 points from their first seven games?

“The atmosphere is really good. I haven’t been given a remit as such. I don’t think it was a great place to be at towards the end of last season if I am being honest. I don’t just mean the actual team, but the whole club really.

“The atmosphere has changed, for the moment at least! When you’re winning games that helps of course. We’re the favourites to go up, we’re going to obviously try and do that, that’s the game plan but you’ve got to remember that we were the favourites to do that in the previous two years but didn’t.”

McMahon was 26 when he decided coaching was for him, as a player at Farnborough. A year later, he was assistant to Ian Allinson at Boreham Wood.

He smiles knowingly as I point out the obvious, that coaching and management are two totally different things.

He’s stepped out of his comfort zone and stepped away from a good job. Heading up Tottenham Hotspur’s academy after impressing so much in charge of Dagenham’s kids. And there’s not a coaching badge he hasn’t got

McMahon added: “I used to always question what we were doing in training, ‘why are we doing this’ or ‘shouldn’t we be doing that’ and I did really realise why. As I got to 25 or 26 it clicked that it’s because, I suppose, I was wanted to coach.

“This is my first job as a first team manager. I think people within the club know I work hard, I’ve got a good work ethic. I like to pass the ball and for the team to understand the value of working hard and winning. I liked to try things as a player and I like to as a manager too. I hope we’re exciting to watch. I want players with an edge, players with intelligence levels to do something out of the ordinary.”

A manager with commitment helps. The 2007 FA Trophy winner with Stevenage turned down the chance of one last promotion medal as a player to take what was essentially a meaningless final week of last season as a stand in.

On loan at Boreham Wood, they were all set for the play-offs. Instead, he returned to Stonebridge Road following Day’s departure. His sacrifice made a point to the owners and the fans, showing his desire to take the club forward instead of ending his playing career showered by champagne elsewhere.

“I suppose it was a bit of long-term vision in coming back here when I did, Boreham Wood had promotion to fight for and we had no chance of getting into the play-offs but I had to come back when offered the chance, even if it was only one game,” he adds.

“I was due to retire whatever in the summer and wanted to go out with promotion but this opportunity meant more. I had to do what I had to do.

“But with my record in the play-offs, I probably did them a favour! I’ve lost in finals with Ebbsfleet, Dover, Farnborough and Cambridge United at Wembley. I’d rather avoid them all together if it’s at all possible.”

McMahon is going the right way about it.