We can make a Dart for it! Boss Tony Burman eyes a title bid 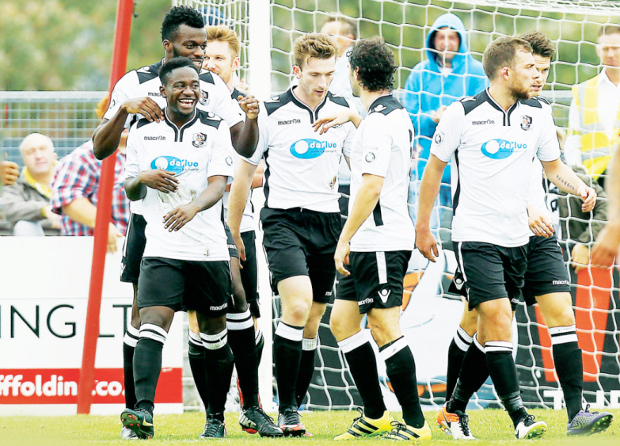 TONY BURMAN considers his Dartford side very much in contention for the National League South title.

In a league shy of a high spender or a big club coming down this season, the division is as open as it has been for many years.

With the top two (Maidenhead and Ebbsfleet) going up last term, the club who finished third automatically fall into focus.

Dartford may not have made the play-off final after losing to Chelmsford over two legs but close season stability could put the Kent club in the driving seat.

While there have been many changes elsewhere, Burman believes it’s better the devil you know.

He said: “We had 12 of last season’s squad committed a week after last season ended. I think that puts us in a really strong position because there wasn’t an awful lot wrong. I didn’t want to break the squad up because they’ve been fantastic.

“I was so pleased with that. We did lose two players, Luke Wanadio went to Bromley, which was disappointing, and Tom Wynter left to join Margate, but they are the only two players who have left while other teams have maybe made more changes.

“We’ve kept with what we know and that backbone is important to what we’re trying to do.”

There’s no clear winner this year, and with the play-off places extended down to seventh, you won’t have to look far for optimism.

“I think it’s best described as more of a level playing field this year,” Burman added. “It’s quite open as a division and that makes things interesting for everyone.

“I hope we’ll be there or thereabouts. I think we can contest for the title and I hope I’m right. But we won’t be alone, that’s for sure.

“There’s some good clubs in the league. Chelmsford will be wanting to go one better. They’ve lost some players but, at the same time, they have recruited well.

“Havant & Waterlooville have bounced straight back up after relegation from this league a year ago. I think they will have learned lessons from that and will be much stronger for it.

“Hampton, under Alan Dowson, would have taken stock after a good year and will look to improve, then you’ve got your clubs like Poole and Hungerford who missed out on the play-offs because of non-footballing reasons. Then you’ve got your Braintrees and Bath Citys.”

Dartford are only looking for “one or two” new players – and Burman would love one of them to be the club’s former striker Charlie Sheringham.

“I know Charlie well and really rate him highly,” said the Princes Park manager. “We’re keen on him but it’s a waiting game on that one because he is looking at his options.

“He did brilliantly for us when he was here three or four years ago. He helped us win promotion from the Conference South and was a favourite with the fans. I would love to bring him back here but we have to wait and see with that one.

“It’s becoming more difficult to sign players. It doesn’t happen now like it used to but there are plenty of gems still out there.”

One player he has managed to get his hands on is winger Lyle Della Verde, 22. He played in the National League South last season with Concord Rangers and Welling United.

“We’re pleased with the little we have done, Lyle is our only new face so far,” said the manager.

“What we like most about him is his energy and the fact that he can play on both wings. We think it’s a signing to excite the supporters.”