Posted on 27th January 2020 by admin in FA Competitions/More News, Latest News, Step 5 and below with 0 Comments 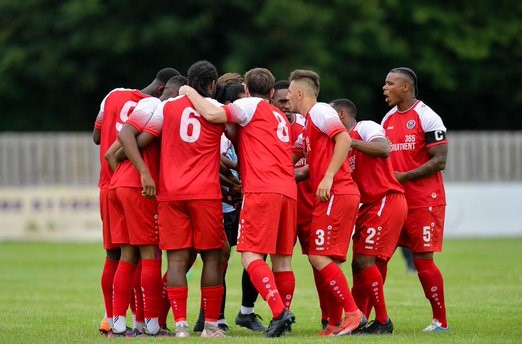 The war between Greenwich Borough and neighbours and former landlords Cray Valley PM was making headlines in The Non-League Paper on Sunday as it escalated.

Under ‘Kent rivals at war’ headlines, Borough claimed an “unlawful eviction” had forced them to withdraw from the Southern Counties East Football League with immediate effect last week.

The south-east London outfit say a number of “severe business interruptions” have left the “odds stacked against them” but insist the club has not folded.

In a hard-hitting statement titled ‘No Chance to Survive’, Greenwich Borough accused Cray Valley, the 2019 FA Vase finalists, of “overstepping their place in football” and say they will be “shamed for all the wrong doing”.

They also allege that the Millers have poached the club’s youth teams and have taken possession of various items of equipment.

All the accusations have been strongly denied by Cray Valley PM who won promotion to the Isthmian League South East Division last season as SCEFL champions.

Established back in 1928, Greenwich Borough first had their survival threatened when their old stadium, Harrow Meadow, was sold off to property developers in 2009, forcing them to groundshare with Holmesdale FC and then Dartford.

In 2016, just after winning the Southern Counties East League and winning promotion to the Isthmian League Division One South, the club agreed a deal to share Cray Valley’s Badgers Sports Ground in Eltham, Kent.

However, they were evicted in April 2019 – just three weeks before the terms of their lease was due to expire – for rent arrears amounting to £37,000.

Relegated back to Step 5 that same season, the club moved to the nearby Phoenix Sports Ground in Barnehurst but have struggled ever since and prior to their announcement this week sat bottom of the SCEFL Premier Division.

The no-holds-barred statement read: “After season 2018-19 of an unlawful eviction, the club has never been able to pick up any momentum and have fought a battle behind the scenes of nothing but constant interruption.

“It has taken great courage from players and managers to take the steps to work through this trying time and ‘play football’.

“The club being told it’s a club-to-club issue for an unlawful eviction with other more severe issues going on was nothing but leaving the club isolated and confused.

“No court papers, no forfeiture and no court bailiff. Is this football? Where is the law and do we just turn a blind eye in this modern day?”

It went on: “This is a matter that one club and its officials have abused their positions and should face the relevant sanctions for their actions. No lease, no termination and no rent due, and a lock out.

“Cray Valley organised a party that should not have taken place but did with people laughing but not knowing they were adding to the issue.”

The post finished by thanking those who helped and supported the club during their tough times, and says the club has had to enter into a number of civil cases to “unravel why, what and how this took place”.

Cray Valley were contacted by The Non-League Paper and vigorously deny that Greenwich Borough’s eviction was unlawful.

They say they don’t want to get into a “public spat” with their neighbours and chose not to comment, opting instead to “maintain a dignified silence amidst the outrageous allegations” made against them.

Make sure you get your copy of The Non-League Paper on Sunday and Monday for the latest news from across Non-League over the last seven days, together with exclusive match reports and pictures from all of Saturday’s action from the National League to Steps 5 & 6 and the Southern Counties East Football League.