FA Vase: Real Deal have dealt with it all before insists boss! 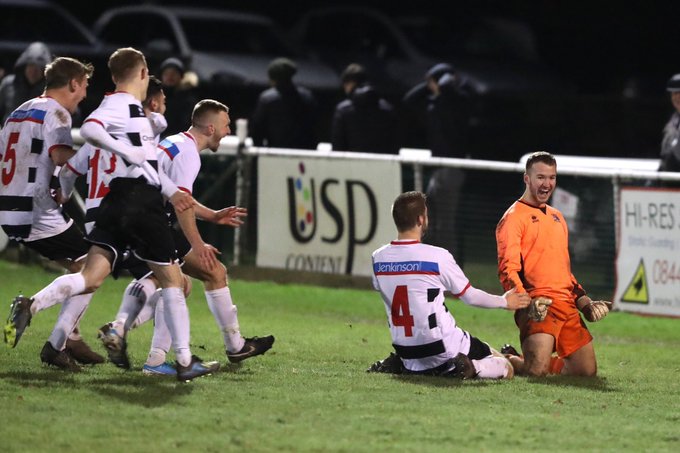 Derek Hares has told the The Non-League Paper he’s loving leading Deal Town on another big FA Vase day out today – 20 years on from their maiden success.

The Kent side lifted the Vase in 2000 with a 1-0 win over Chippenham Town in the last final at the original Wembley Stadium. It was also the first one covered by The Non-League Paper soon after its launch two decades ago!

Now, the Southern Counties East Hoops are on the glory trail once as they prepare to embark on a 700-mile round trip to Consett on Saturday with their sights set firmly on a place in the last eight of the Buildbase FA Vase.

“It has been absolutely brilliant – everyone’s talking about it and the players can’t wait,” Hares told The NLP as he looked ahead to today’s big game in this week’s paper.

“We’re going to make a weekend out of it: go up on the Friday, play the game on Saturday and then come back on Sunday.

“The supporters’ coach leaves at 6am on Saturday for a seven-hour trip minimum. We’re all looking forward to it.

“The year we won the Vase in 2000 we played at Newcastle Town in the semi-final and the last time we reached the fourth round we went up to Jarrow so it seems like history is repeating itself.”

Hares joined the club the following season, in 2001, but remembers the excitement of winning the Vase from the stands.

“The fans that went to the final still talk about it now, if we could get a win up at Consett we’d be flying,” Hares recalled.

“I used to watch Deal play before I joined the club but unfortunately I was unable to make the final at Wembley.

“I was at the semi-final which was brilliant. There were nearly 3,000 people at the game. It was great for the town and it was a run that has never been forgotten.

“We’ve still got a long way to go to achieve that but we’re on the right road.”

20 years on from going Wembley and winning the FA Vase…. only 3 games from Wembley again… @DealTownFC pic.twitter.com/qrmHV5LeND

Deal progressed to round five with a thrilling penalty shootout win over Binfield after drawing the replay 3-3.

“The Binfield win was exceptional– probably the most exciting match I’ve ever been involved in,” Hares continued.

“As each round has gone by it’s got more exciting. Because we have won it in the past – and the only Kent club to do so – it means the momentum has started to build.

“Consett are going well and score a lot of goals so I would imagine they will start as favourites but we have done well in previous rounds and I see no reason why we can’t carry that on.

“Consett look like they get quite good crowds anyway so I’m hoping there will be a decent atmosphere.”

Make sure you get your copy of The Non-League Paper on Sunday for the latest news from across Non-League over the last seven days, including today’s action in the Buildbase-sponsored FA Trophy and FA Vase.