Tons of joy as Clapton fans finally own spiritual home after 130 years!

Posted on 25th July 2020 by admin in FA Competitions/More News, Latest News, Step 5 and below with 0 Comments 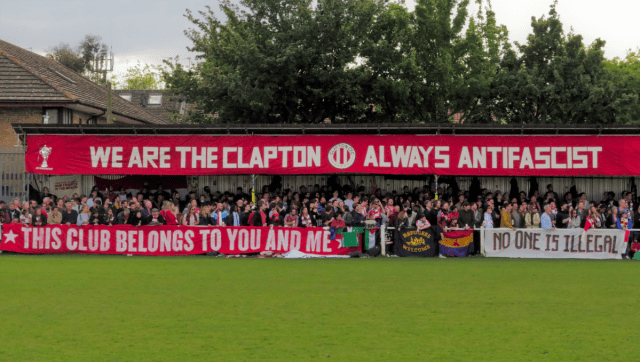 Formed in February 2018 by disillusioned supporters of Clapton FC, proud officials at the fan-run Tons announced they’d officially taken ownership of the historic ground in Forest Gate on Friday.

According to club statement, the ground needs a significant amount of work to bring it back up to the required standard after the lease of the previous owners was terminated after a sustained period of neglect.

The club’s members voted unanimously to make an offer for a ground that has hosted Arsenal, Tottenham Hotspur and West Ham United as well as Dutch giants Ajax and a host of 1966 World Cup winners.

Spokesman Kevin Blowe said: “For the first time ever, the oldest senior football ground in London is owned by a football club, and a member-run, non-profit, community-focused football club at that.

“Bringing Clapton’s spiritual home back into community use, after a season of boycotts of Clapton FC home games when it was placed into liquidation by the previous tenant, was absolutely central to the motivation for setting up Clapton CFC back in the summer of 2018.

“Finally having a ground of our own, owned by members, will offer long term stability for the club and also the chance to build lasting links with the local community.”

Clapton CFC was voted into existence in February 2018 after years of mismanagement at Clapton FC. The new club is a continuation of the old one, which was founded in 1878 as a member’s club. Membership at the other Clapton has been closed due to “restructuring” for years.

Please note: @ClaptonCFC men’s & women’s teams will play the 20/21 season in Walthamstow, while we work on making the Old Spotted Dog a safe and welcoming place for fans.

We will post info on how supporters can help shortly.

Long road home, but it will be worth it. ? pic.twitter.com/EkjOW2eOE9

The supporters have always aimed to take full ownership of their home to safeguard the club’s past, present and future.

Their strong stance against racism, sexism and homophobia has attracted members from around the world, particularly from Spain as their away kit is adorned with the colours and the three-point star of the International Brigades, who travelled from far and wide to fight against General Franco’s fascist regime.

As reported by The NLP, they passed the 1,000th member milestone within months of being founded. For more information visit: claptoncfc.co.uk

Make sure you get your copy of The Non-League Paper from last weekend for the latest news as Non-League comes out of lockdown and the results of our ‘return to football’ survey in partnership with the Football Supporters Association!