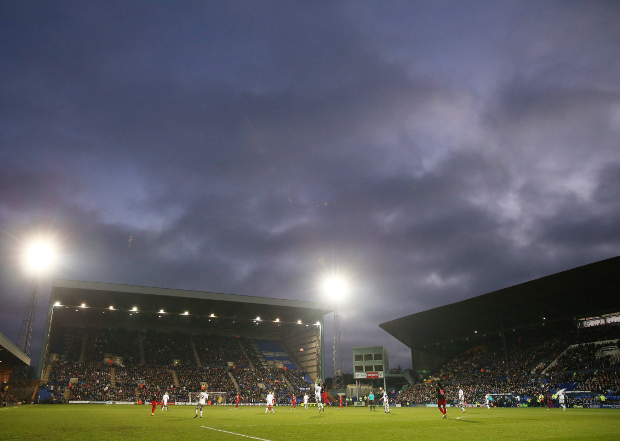 SOUTH PARK manager Malcolm Porter might not have been able to join in with his side’s celebrations in person after they booked an FA Trophy date at Non-League big guns Tranmere Rovers – but he could via Facetime!

Goals from Kieran Lavery, Kofi Quartey and Ben King fired the Ryman Division One South side to a 3-1 win against North Leigh in last Tuesday’s replay.

It means the Sparks have reached the competition’s last 16, where the National League promotion chasers await, in just their third year in the competition.

A recent hip replacement operation forced Porter to follow the North Leigh win on social media. Instead, a video call from a jubilant changing room put him right in the thick of it.

“I followed the game on twitter, phone calls and trying to find any other bits of information I could,” Porter said. “A local newspaper was tweeting, so my thumb was raw from refreshing my twitter!

“Joe McElligott, who managed the team in my absence, is massively experienced as a manager and a player and the team did phenomenally well. I had a Facetime call from all the boys and it was a very noisy, excited changing room. To have the opportunity to go up and play Tranmere in the FA Trophy will be fantastic.

“I’ve spoken to all the players and I was saying to one of them, if you go back to the year 2000 Tranmere were in the League Cup final and we were still playing park football.

“Obviously they’ve slid down the leagues, and are on their way back up now, and we’ve jumped up through the divisions. Here we are, playing each other in the FA Trophy.”

The Step 4 Sparks – who have now come through five ties, including beating National League South Oxford City – will travel north the day before the second round clash.

For now Porter will get his side focused back on the league as they bid to climb the table, but he hopes when the big day comes they will proudly show off the name of South Park.

“Hopefully their supporters will come out to see what South Park are all about and we get a good crowd – that will be fantastic for us,” Porter said.

“Some will never have heard of us. I’ll be surprised if some people aren’t dressed as the characters of South Park!

“We once got to the FA Vase quarter-final and people were saying, ‘This is as good as it’s going to ever get’. Two seasons later we got to the FA Cup fourth qualifying round, last year we played Maidstone United in the FA Cup.

“Every year or two we seem to create a great experience that tops what has come before. But we’re not going all the way there just for the experience. We want to go out there and do ourselves justice.”