Home / Latest News / Isthmian Leagues / Pyramid restructuring: Everything we do is for the clubs, says NPL chief Mark Harris

Pyramid restructuring: Everything we do is for the clubs, says NPL chief Mark Harris 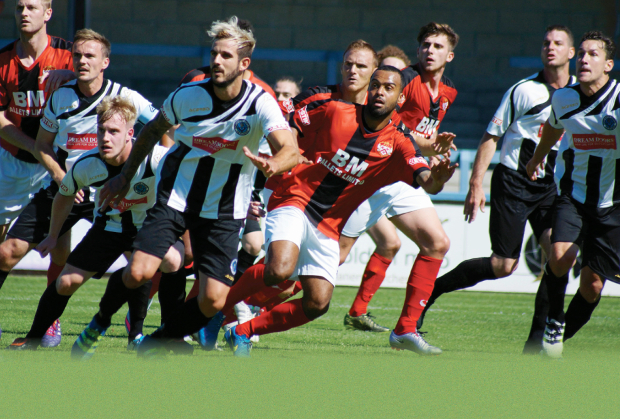 NORTHERN PREMIER League chairman Mark Harris believes the upcoming restructuring at both Step 3 and 4 is natural evolution for the National League System.

The NLP revealed last month that the Football Association’s plans to add a new division at both Step 3 and 4 are set to be introduced for the 2018-19 season.

The governing body’s aim is to reduce travelling costs and times, as well as create a better flow in the Pyramid.

Ownership and the footprint of the new divisions is still to be decided – and the label of a ‘Midlands division’ isn’t accurate – but the plans are part of addressing the central part of the country.

Now the finer details are being hammered out and The NPL, Isthmian and Southern Leagues – following consultation with their member clubs – are taking their views to the FA.

And Harris says the plans are aiming to benefit clubs, players and fans.

“The reorganisation is important because, above anything else, everything we do is for clubs,” Harris, who is also chairman of Evo-Stik NPL South club Witton Albion, told The NLP.

“The people that matter most are the clubs, and, by extension, the fans. The primary objective of this reorganisation is to reduce travelling. The mileage in some of the leagues is very large.

“In our own league we have in recent seasons – although King’s Lynn are no longer with us – had clubs having to take two drivers on a coach to get from one end of the patch to the other.

“So it’s important. Football is all about local derbies. You don’t need to be a rocket scientist to work out the more local derbies clubs have, the better it is for both practical and emotional reasons.

“These days, with sponsorship monies being very tight, the first priority of clubs is to ensure they’re running robust businesses. You don’t want to lose money.

“But there’s also the hidden cost. For example, we never really consider the impact on a player of having to take time off work consistently and the midweek travelling.

“Take an average midweek trip. If we’re going, as Witton Albion did recently, to Lincoln United, that’s a 3pm set off.

“So the lads lose half a day’s pay. Then there’s the physical impact. They’re getting back at two or three in the morning and they’ve got to be up for work the next day.

“Supporters are having to do exactly the same. While it isn’t compulsory to go to the other end of the country to support your team, that’s what being a football fan is all about.”

Step 3 divisions will be reduced to 22 clubs and Step 4 leagues lowered to 20, with regulations now being hammered out for how the numbers will be rejigged.

Although yet to be ratified, it’s likely only one club will be relegated from each Step 3 and 4 division.

“We keep our clubs informed and consult with them,” Harris said. “For example, the issue of how many clubs should be relegated from Steps 3 and 4 in the season prior to reorganisation.

“We did a survey around the clubs to ensure the view that I as the league’s representative put forward is fully reflective of the views of our member clubs.

“That’s not always to say you’ll get your own way, but at least the important thing is their voice, through me at Wembley, is reflective of the majority opinion.

“The NPL’s view – for some years – was that there should be no relegation from Step 3 to Step 4 next season. Simply because, we believe it’s going to be tough enough to find the additional clubs to find the clubs coming from Step 5 to fill the new vacancies at Step 4.

“That view was certainly endorsed by the majority of our clubs, but it wasn’t the only view there. That’s what we put forward to the Alliance Committee.

“Ultimately that was unsuccessful and therefore we’ve got a sensible compromise where one club will be relegated from each Step 3 division and one club from each Step 4 division.”

Harris points out the commercial aspects and the importance of keeping the Non-League product appetising to all – something smaller, and more competitive leagues will help.

“The decisions around this also have to bear in mind sponsorship income isn’t something that’s the cherry on top. It’s an essential element of how you keep your football clubs going.

“Whatever we can do to make our level of the game more attractive to external funding has to be for the benefit of all.

“You can’t turn the clock back. We’re now in the second decade of the 21st century. It isn’t the 1950s or 60s anymore when thousands of people turned up to watched County cup finals and County league matches.

“Life has moved on, football certainly has. It’s not about turning the clock back, it’s about moving the National League System to its next natural stage of evolution.”