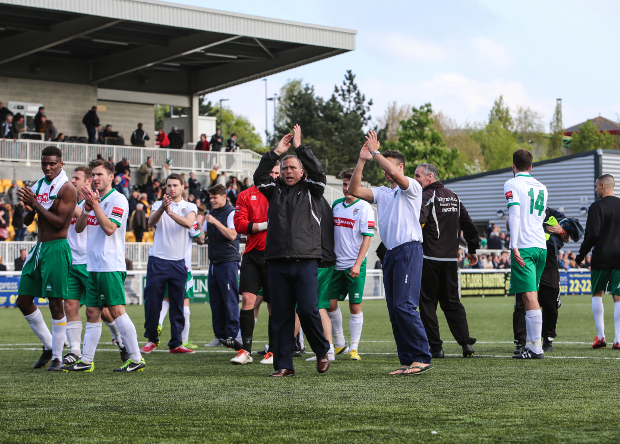 JAMIE HOWELL admits he feared the worst for Bognor Regis Town ahead of this season.

Keeper Grant Smith moved up to the National League with Boreham Wood, while defender Craig Robson jumped to the same level with promotion-chasing Dagenham & Redbridge.

Goals left the building too, with 45-goal striker Jason Prior and Alfie Rutherford, who got 21 last year, making the switch to league rivals Havant & Waterlooville.

Midfielder James Fraser has 18 in the league this year, but Howell feels the squad as a whole stepping up to fill the void has been key.

“I’m really pleased with how the season is going,” said Howell, whose side remained top of the Ryman Premier thanks to the 7-1 win over Folkestone Invicta on Tuesday night.

“It’s no secret when you have success that good players move on. We lost five players in all. That’s the spine of your team.

“Pre-season was a bit of a disaster, we took two points from the first three games and I remember thinking, ‘This could be a long season – we need to make sure we don’t get relegated!’

“However, we still had a lot of good players from last year. We’ve added a little bit, taken a few gambles and got a bit of momentum.

“A lot of the lads have played together a long time and we all like each other. They’re a good bunch. On paper, we possibly had a better team last year than this year. But sometimes when you haven’t got those couple of players who will score you goals, everyone else has to step up as a team.

“We’re a different beast this year. We’re not scoring as many goals as we’d like, but we’ve had to work on our defensive shape and do well at that.”

Playing catch-up on league games following the Trophy run, Howell’s side missed out on the title to Hampton & Richmond by a point and then fell in the play-offs for a second time in three seasons.

He hopes they can, at least, reach the post-season shake-up once again, but he’s remaining philosophical about their achievements whatever the outcome.

“Last year, the Trophy was a brilliant experience for the club,” Howell said. “But this year I’ve been equally pleased because of the circumstances of how we’ve had to get here.

“We learnt a lot from last year. We’ll see where the coming weeks take us but whatever happens, it’s been a good season.”