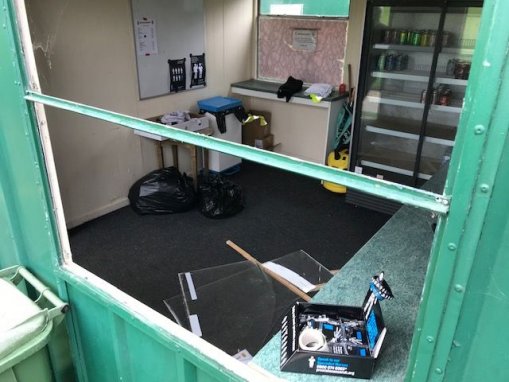 East Thurrock United have set up an online fundraising page after the cash they raised for Prostate Cancer UK on Non-League Day was stolen.

The Isthmian League’s Rocks launched the appeal after discovering their refreshment bar had been broken into and ransacked after their 1-0 win over Lewes on Saturday.

As well as the mindless damage, pictured, the collection box for the charity was stolen after being topped up with the proceeds from the Essex club’s matchday draw.

According to a club statement, the Go Fund Me page was set up on Sunday by the son of manager John Coventry, John Coventry junior, within hours of the break-in at Rookery Hill being discovered.

The Rocks said: “The edge was taken off a brilliant Non-League Day for the club when we discovered this morning that our refreshment bar had been broken into.

“As well as causing mindless damage and stealing soft drinks and chocolate, the kids also made off with the Prostate Cancer UK collection box. Their parents must be so proud of them.

“As all football fans are aware, Prostate Cancer UK is the supported charity of Non-League Day. The club had already donated the proceeds of Saturday’s 50-50 draw to the charity.

“To make up for the loss, John Coventry junior has set up a Go Fund Me page to raise funds for Prostate Cancer UK.

“It can be found via the link; https://www.gofundme.com/f/east-thurrock-united-prostate-cancer-uk. We would of course welcome your support.”

Non-League Day 2019 was celebrated up and down the country in soggy but high spirits on Saturday.

There was no shortage of media publicity or promotion as the country’s top sides encouraged their fans to turn out for their local clubs during the international break.