Posted on 23rd April 2020 by admin in Isthmian Leagues, Latest News with 0 Comments 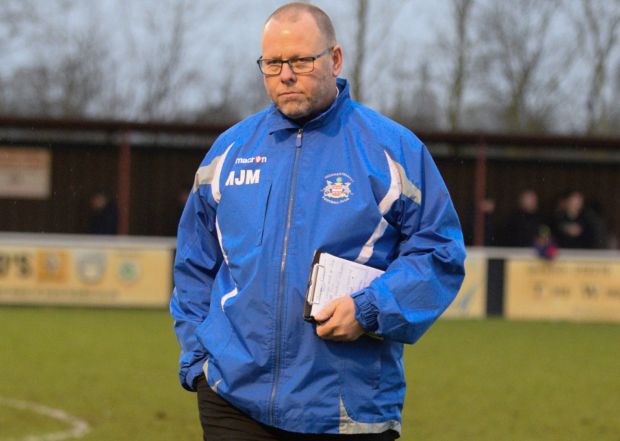 AFC Sudbury welcomed Mark Morsley back into their hot-seat today, five weeks after he stood down to help the Isthmian League’s Yellows get through football’s lockdown.

The popular Yellows boss, pictured, was re-appointed as manager of AFC Sudbury for a third spell on Thursday morning with immediate effect.

Former Needham Market and Leiston manager Morlsey, who re-joined the Yellows in October 2017, stepped down on March 17, the same the day the Isthmian League extended its initial suspension of the season into April before it was subsequently abandoned.

The Isthmian League North club’s officials told fans they’d taken a series of measures to get themselves into a healthier financial position, including the furloughing of staff, to enable Morsley to return after speaking to number of other ‘highly-qualified candidates’.

The statement from King’s Marsh read: “The board of AFC Sudbury are delighted to announce that Mark Morsley has agreed to return as first team manager with immediate effect. Mark volunteered to resign at the time of the outbreak of Covid 19 when concerns were at their highest as to the financial implications to the football club of a continued lock down.

“These worries were somewhat reduced shortly after this when the UK government announced several helpful financial initiatives which the club has tried to make use of. Many further cost saving measures have been necessarily introduced with the sole intention of securing the future of the club for when things return to normal.

“The board remains extremely grateful to every member of staff, our volunteers and our supporters all of whom have helped with these endeavours. In particular without the employees agreeing to be “furloughed” the future would be a lot less secure.

“Now it is time to look forward and to plan for next season as the financial picture looks a whole lot brighter. We are not yet “out of the woods”. But it is time now to think about how our first team is going to look when football recommences. We have to plan ahead.

“The club received a number of applications for the position of first team manager at our great club. But Mark remained at all times the outstanding candidate. He knows the club. He has bought into our project to make the academy the cornerstone of AFC Sudbury. He is a serial winner and has the club firmly at heart.

“The board therefore approached Mark to ask if he would return and happily he did not need too much persuasion. We can now look forward to the 20/21 season with renewed optimism that our first team management of Mark, Danny Laws and Dave Cannon will continue the progress that was there for all to see when the 19/20 was unfortunately curtailed.”

The statement added: “I am sure that every supporter will join me in wishing them every success. Welcome back Mark and Up the Yellows.”

Make sure you get your copy of The Non-League Paper  this weekend for the latest news on the impact of the coronavirus crisis on football and society.

In shops on Sundays and Mondays, The NLP is always available as a pound-busting digital edition and full replica of the printed paper from midnight on Saturdays. Save cash on single issues, even more on longer deals and the pages still rustle!