Expat rides to the rescue with £750k sponsorship deal for FC Romania!

Posted on 14th August 2020 by admin in Isthmian Leagues, Latest News with 0 Comments 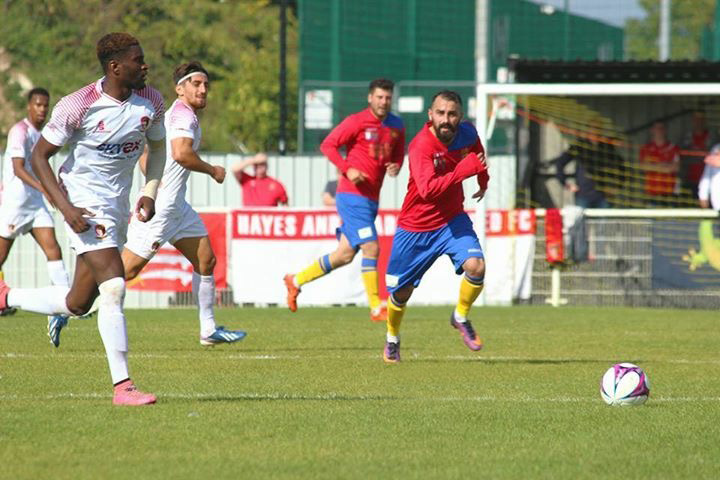 An expat Romanian businessman has helped to save FC Romania from folding by using his construction company to sign one of the biggest sponsorship deals in Non-League history.

Wembley-based businessman and entrepreneur Stefan Voloseniuc rode to the rescue on Thursday after spotting a post on social media from the club’s founder and manager Ionu Vintil saying he was calling it a day after 14 years because of a lack of sponsorship and support for the project.

FC Romania, who currently groundshare with fellow Isthmian League side Cheshunt in Hertfordshire, had seen a complete loss of income and sponsorship thanks to the coronavirus crisis before Voloseniuc’s civil engineering company SF Stefan agreed a deal worth £750,000 across the next five seasons.

Founded in 2006 to bring football-loving Romanian workers together as a Sunday side playing on Hackney Marshes, Vintil took the Wolves into the Isthmian League South’s Central Division in the summer of 2018 via the Essex Football League, Middlesex County League and the Essex Senior. On the way, they’ve played in the FA Vase, FA Trophy and FA Cup.

We are delighted to announce an amazing new sponsorship deal of £750,000 across 5 years with Romanian-owned civil engineering company, SF Stefan. Massive thanks to the incredible Stefan Voloseniuc & all at SF Stefan for making this happen and securing FC Romania’s future ! pic.twitter.com/xJIdcNgbrP

Romanian-born Voloseniuc moved to the UK in 2007 to work as a labourer before starting SF Stefan, now one of the largest and most successful civil engineering companies in London and the South East.

He said: “Like many Romanians in the UK I was aware of the club and knew that it would be dreadful for the team and their local players and supporters if they had been forced to close because of a situation that is completely out of their control.

“When I spoke with Ionu I was deeply impressed to hear how he has dedicated his life to FC Romania and providing a chance for so many Romanians and others to play football at a very competitive level in England.

“I managed to convince him not to give up on his amazing club and look forward to our company working with him and his team to help take his brilliant project forward.

“I am enormously happy that by sponsoring FC Romania for the next five seasons we are able to put something back into the Romanian community especially as SF Stefan was founded and grew out of the North London area where so many of the Romanian diaspora now live.”

This man wrote the history for our club? https://t.co/dK1EOqQm0r

“I had the support of many Romanians in London when I first created and began to build SF Stefan so it is very good to now be able to support others.

“Our company motto is ‘We Build To Last’ so it seems a very good and natural fit that we should work with Ionu and his team at FC Romania as they have shown by their results and reputation that they are also built to last and deserve to have a long and successful future.

“A phrase I was taught long ago is that we can all do small things but with a great love and that together we can do something beautiful and that has been the case this week.”

Vintil is astonished that the future of his club has been secured in such a short space of time and welcomed the reversal in fortunes in a club statement.

“This is better than anything I could have possibly imagined,” he said. “It was a heartbreaking position to be in after all we have achieved during the past 14 years but a few days after I spoke with Stefan last Thursday the deal was concluded.

“I really feel that God has brought us the right man at the right time to support our club and our great community. Stefan is one of the best Romanians that I have met since I came to the UK and I feel blessed that we both share a love and dedication for our community and I’m confident that with having SF Stefan as our sponsors we will build together a great club.”