Andre Gray Bossing Things Both On And Off The Pitch 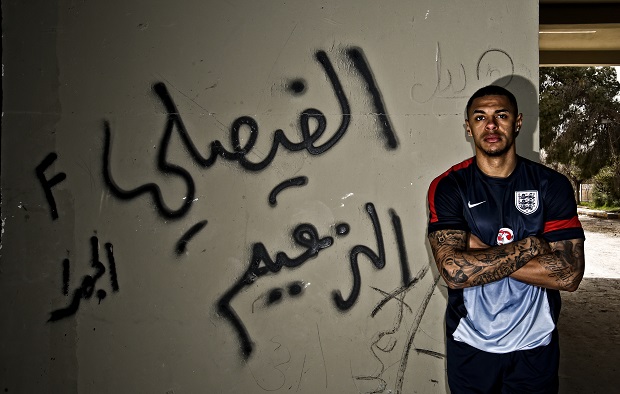 THE BOSS, reads the graffiti on the wall behind Andre Gray. It couldn’t be a much more fitting translation for the Luton Town and England C striker.

On the pitch he’s certainly bossing it. The 22-year-old has scored 25 times this season and, before winning his sixth England C cap in Jordan, he had 11 in last six games including two hat-tricks.

Those goals are helping Luton march back into the Football League after a five-year absence and Gray to the top of the Skrill Premier goalscoring charts.

But it’s in England’s hotel in Jordan’s capital Amman, that Gray sits down and talks about the other things he’s trying to ‘Boss’ – like little brother Cody.

“His dad passed away a few months ago,” Gray says. “He’s three-and-a-half so that’s going to be hard for him.

“I have to take care of him. He’s not going to have a dad now and no one to teach him men’s things.

“My mum, nan and grandad brought me up and my grandad showed me football. He passed away when I was 13 and my mum had to take me to football. She dropped everything so we could catch trains to Shrewsbury. I think I only went once by myself because she did her best for me. I owe her everything.

“When my grandad passed away I probably went through a stage where I lost my way a bit when I was at Shrewsbury because I had no one to tell and keep me straight.

“Obviously your mum doesn’t know about those kind of ‘man’ situations and now I need to step up and take my brother under my wing.

“I know what my grandad wants me to do and that’s look after my family. It’s driving me to work harder, I’ve got take it in my stride. I’ve learnt there is no time for excuses.”

Andre Gray in action against Jordan Under-23

Mum Joanna also unlocked the door for a young Gray to mix in the players’ lounge at Wolves, where she worked on match days.

It’s was a football environment he was accustomed to having joined Shrewsbury after leaving the Wolves Academy.

He graduated to the first team, making four appearances, but admits he didn’t work hard enough to stay there.

And when he joined Conference North Hinckley reality set in.

“I was at the stage in my life where I thought everything was set for me,” he says. “I didn’t really care about playing in Shrewsbury’s reserves which it shouldn’t have been.

“The step down to Hinckley was like, ‘yeah, whatever’. As long as I still had a job and was getting paid it was ok. Until I started playing and realised that full-time football was the only thing I wanted to do, it kicked me into gear.

“Being bored all day, waiting to go training made me really want it. I worked now and then. I did coaching but hated it.

“I started going to the gym every day and instead of driving I’d ride my bike everywhere to get fitter and give myself the best chance.”

His goals and performances with the Knitters sealed a move back to full-time football with Luton where he hopes to fulfil his goal of getting back into the League in the next two months.

England C players enjoy a dip in the Dead Sea

“People go to University, come out and don’t know what they want to do but they’ve studied for three years to do it.

“To come out of full-time football and go part-time made my mind up. I had to go through a childish stage.

“I’m glad I got that set-back so young because now I know that’s not where I want to end up again. Ever.

“It’s inspiring to be in this England C team. There are a lot of players who have come out and played in the Premier League. Everyone’s got a dream, mine is to play as high as I can.

“The only thing that stops people is what is in their head. Playing Non-League gives you that drive.”