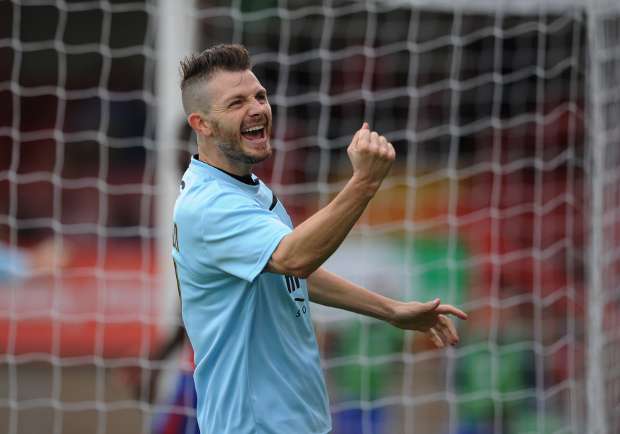 EXPERIENCED striker Jamie Cureton believes he has joined a club more than capable of promotion to the Football League after putting pen to paper with Eastleigh.

The 41-year-old, released by Dagenham & Redbridge at the end of last season following relegation from League Two, had started this campaign at Farnborough.

He had already netted eight times for the Southern Central outfit but has now earned a move back up the Pyramid, signing for ambitious Eastleigh until the end of the season.

A man with undoubted pedigree, Cureton has terrorised defences for over 20 years, scoring over 250 goals in 700 professional appearances for the likes of Bristol Rovers, Reading, Norwich City and Exeter.

Cureton goes straight into the Spitfires squad for Saturday’s game against Sutton United and he said: “I am delighted to be joining Eastleigh FC.

“It’s a club on the up with ambitions to get into the Football League and with the squad and management team they have in place it’s something I believe can happen this season.

“I’ll be looking to add to the group and hopefully will achieve what we all want, promotion come the end of the season.  I would like to thank everyone at the club for making this move happen, I know it’s not been easy.”

Eastleigh boss Ronnie Moore added: “Jamie is and as always been a goalscorer. We are a striker down with Scott Wilson having an hamstring injury, Jamie will give us goals and I see him as being an impact player.

“He can be the difference between us winning games. His goals can take us where we want to be come the end of the season.”

Cureton becomes Moore’s second signing as Spitfires boss after he added 34-year-old goalkeeper Ryan Clarke on Wednesday following his release from League One side AFC Wimbledon.