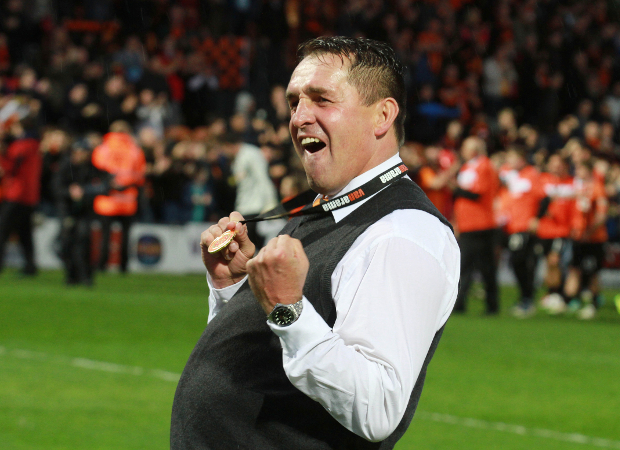 Allen’s first game in charge was Saturday’s FA Cup second-round draw against FC Halifax Town, but promotion to the Football League is his priority.

With half the season already gone, the new Spitfires boss is aiming for his second National League title in three seasons after guiding Barnet to the title in 2014-15.

“It’s a tough division to get out of, only two do,” said Allen, whose new side is nine points off the play-offs.

“To be champions is achievable this season. You have to be pretty special to be a champion, but we’re only halfway through.

“The crunch time will come towards Easter. That’s when it’s really going to matter and when we find out what we’ve got.

“We’ll see if the teams at the top can handle the pressure of being at the top, because it’s hard being at the top. My Barnet team dealt with it because we were top of the league from the first game till the last game.

“We’ve got to come from behind, but we will put a run together and these players will challenge, there’s no doubt about that.”

Barnet’s FA Cup exit at Shrewsbury last month meant Allen was looking forward to a rare weekend off before Eastleigh contacted him within 24 hours of Ronnie Moore’s shock exit.

“It was totally out of the blue,” he said. “I was all set for a quiet weekend with plans to see the family, walk the dogs and tidy up the garden for the winter and here we are now.”

Allen admits it was a difficult decision to leave Barnet, where he was in his fourth spell as manager, because of the bond he had with his players.

But he has brought his number two James Russell with him and has also been reunited with Bondz N’Gala less than a fortnight after Eastleigh bought the defender for a club record £60,000.

“Bondz is a very special person to me; he’s one of my champions,” he said. “I’m very close to my players and obviously didn’t want to sell Bondz, but the offer was too high to turn down, so he moved on.

N’Gala was a key member of the Barnet side that pipped Bristol Rovers to the title by a point two seasons ago.

“There are good players here, but what I had at Barnet wasn’t about the players, it was about the people,” continued Allen.

“We had good characters, good personalities and a fantastic work ethic, unity and team spirit.

“We didn’t have many players for my last home game, only 15 outfield players and two goalies. But we had camaraderie, unity and honesty – values that were all put in place from day one.

“That is powerful and only time will tell if we can do that with this group. How far can I take them? I’ve no idea, but the owner’s got great plans and a great vision. Long-term, anything is possible with his ambition.We want to make history.”