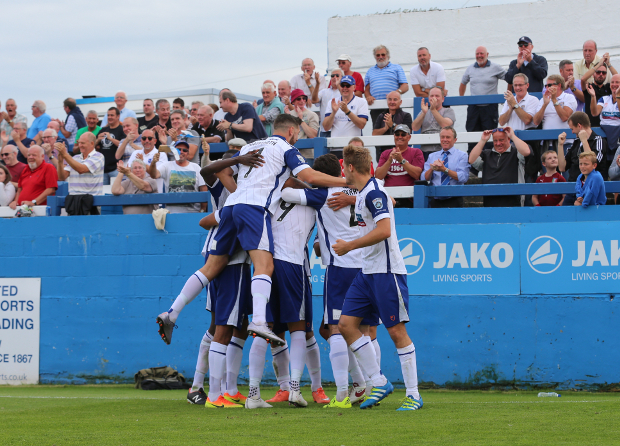 IF YOU’RE not taking Barrow as serious promotion contenders then you really should be. Yes, they lost to Forest Green Rovers last week, but there are always ups and downs as the promotion race really intensifies.

The manager Paul Cox is doing an excellent job and he really deserves a lot of praise for the team he’s put together.

Let’s not forget, Barrow isn’t the easiest place to sign players. Credit to him that he moved the training ground so they’re near Manchester now, which makes a big difference.

If you get a phone call from the Barrow manager, then speak to your wife and say, ‘I’m moving to Barrow,’ it might be a tricky conversation. But when you can say they train in Manchester and you’re only going to go there every other week to play a game, it’s much easier.

Holker Street can be a big factor in their success. Even I get depressed going up there and I’m not playing! On a Tuesday night, that can work in your favour because it’s a difficult place for the opposition at the best of times.

I’ve been very impressed with them this season. They showed they’re a good side with the 26-game unbeaten run that was ended by Gateshead on New Year’s Eve. They reminded me of Brighton & Hove Albion last season.

My old club went on a 21-game unbeaten run. The minute they lost, they went on a horrendous run. When Barrow’s streak finally ended they lost three National League games in a row before beating Lincoln 3-0.

That night they took advantage of the amount of games Lincoln have played of late, and thoroughly deserved the points.

I’d say they’re exceeding expectations in terms of where they are in the league, but they’ve got some good players. I really like the left-back Nick Anderton, who they managed to keep hold of in the transfer window despite interest from Football League clubs.

Defensively they are strong. Centre-back Moussa Diarra has been excellent alongside Danny Livesey. It’s a good partnership.

A lot is made of their direct style of football. The critics have got it wrong. They’re playing to their strengths. I’m not being funny, but I wouldn’t say Cheltenham played great football when they got promoted. I wouldn’t say Barnet did either. It’s all about winning games of football.

If you’ve got a big, physical side, you’re not going to get the ball down and start playing out of the back. I wouldn’t trust Diarra to get the ball off the goalkeeper and start pinging 40-yard balls on the diagonal to the winger’s feet.

They’ve got capable players. Anderton can get forward, I like Jordan Williams too – he can get goals. Byron Harrison and Richie Bennett are two physical strikers. So you work with that. Lincoln do it to a certain extent – they play to Matt Rhead on the diagonal. Tranmere do with Andy Cook. Cheltenham played long to Danny Wright, Barnet to John Akinde. If they get promoted doing it, no one at Barrow is going to care.

I remember a conversation I had at Eastleigh where someone was saying, ‘They just blast it’. But Barrow had just won 4-0! You can play all the football in the world, if you can’t deal with the physical battle then it doesn’t matter. And it works.

No one wants to go to Barrow on a Tuesday night when it’s peeing down with rain and get long balls thrown on their head 60 times a game. It’s a side of football teams can struggle with psychologically.

Paul hasn’t got the biggest of squads and they’ll need to strengthen to get through to the end of the season and into the play-off battle.

Harrison has picked up an ankle injury, so he’s dipped into the transfer market to sign another big striker, Inih Effiong, from Biggleswade Town and Shaun?Tuton on loan from?Barnsley.

Can they go up? Look, I tipped Forest Green Rovers to win the league this year. Back then I didn’t know Mark Cooper would swap and change the team about so much.

I’ve been slated for this, but I just don’t think, as a club, Forest Green really believe they will get promoted. Eastleigh are similar for me, but if there’s a manager outside the current top six who could sneak a team in there, it’s Martin Allen.

From what I’ve seen, the Imps will win the league. It’s the hardest National League promotion race to call in a long time. But Barrow are certainly in the conversation.

*This article first appeared in The NLP on Sunday, February 5