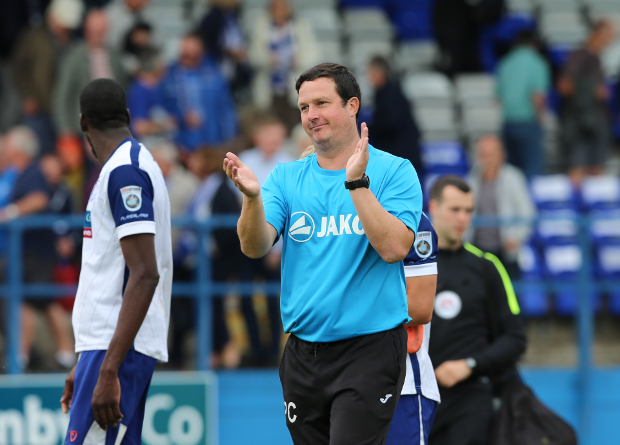 BARROW boss Paul Cox has strengthened his squad for the National League run-in with the addition of three Championship youngsters on loan.

Cox, who admitted he was “baffled” by his side’s inconsistent form after Saturday’s 2-2 draw at Aldershot, has brought in Matty Platt and Connor Thomson from Blackburn Rovers and Wigan Athletic’s Luke Burke.

All three players have joined the Bluebirds until the end of the season and are all eligible to make their debuts at Macclesfield on Wednesday night.

Centre-half Platt, 19, has captained the Blackburn U23 side and signed his first professional deal with Rovers in November 2015.

Thomson, who turned 21 on Tuesday, started his career in the north-west with Carlisle United before making the switch to Blackburn. The winger has made one appearance for the U23 side in the Checkatrade Trophy this season.

Boss Cox told the North-West Evening Mail: “They’re players we’ve watched and kept an eye on. We’ve had to be a little bit patient and wait for the window to close, because there was talk of them going out to Football League clubs.

“Thomson is a north-west boy, he was at Carlisle as a kid. He can play at full-back, but he is a 6ft 3ins winger and he is lightning. He’s someone who excites me. Platt is the captain of the U23s and they are two good additions.”

The third addition, Burke, 18, arrives from Wigan having made five appearances at full-back in the Championship this season under former Manchester United reserves boss Warren Joyce.

Cox added: “He’s one we looked at a while back, but he wasn’t available. We had to wait for the transfer window to close to try to get him in.

“He’s not just coming in to make up the numbers – he has played five times in the Championship already this season, so it just shows his quality.”