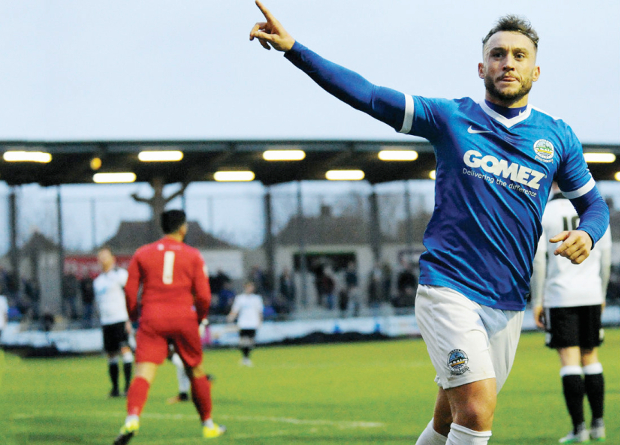 The Dover Athletic forward says one of the assistant referees made the comment to him during last weekend’s fixture with Wrexham.

The Whites striker has been in sensational form this season but the 1-1 draw in Kent was frustrating for him for a number of reasons.

He said he was denied a second-half penalty and after challenging the decision he accused the linesman of telling him “you go down all the time”. Miller is angry at the suggestions he doesn’t stay on his feet and maintains he is an honest player.

The Dover striker has scored 27 league goals this season as Chris Kinnear’s side are fighting for a top five place for the second season running.

He said: “I’m not happy. We should have had a penalty against Wrexham but it didn’t get given. It was clear as day.

“I asked him (the assistant referee) why it wasn’t and he turned around to me again said I go down all the time.

“That is not the case at all, I am not a diver. I’m a player who runs at defenders, that’s what a lot of my game is about. As a striker I make you commit to a challenge – it’s quite obvious that I am going to get fouled more than others!”

Miller says the official should not be making such accusations to a player during a match.

The former Luton Town striker, linked with a move to the Football League throughout this season, added: “I think it’s unprofessional. To judge a decision on reputation and by saying that I ‘do it all the time’ is not right whatever way you look at it.

“It would take someone with a baseball bat to hit me to make me fall over when I am clear on goal. I’m a striker and I want to score – it’s what I do and you can’t beat that feeling of running through and sticking it in the net.

“I do not go down, and I especially don’t go down when there is an opportunity to score a goal! I have never been that type of player and never will be.”

Miller sees no reason why Dover can’t snatch a top five place again but knows how difficult the challenge is. They lost to Forest Green over two legs last May and the Whites want another stab at it.

“We all know there are a lot of strong teams with big budgets but we’ve got a good squad too. We were unlucky to lose in the semi-finals last season we really want to have another go at it,” he said.