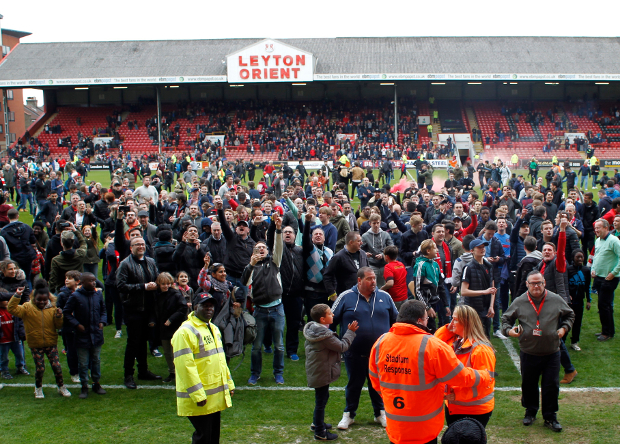 THIRTY YEARS ago this coming August, Lincoln City played their first game in the old Conference and were beaten 4-2 at Barnet in a serious shock to their systems. I know because I was there.

It all kicked off in Underhill’s main stand, one Imps fan hissing at the press box: “Well, they shouldn’t have put us in this f*****g league then, should they?”

Four days later, it would get worse for the first club to be relegated automatically from the Football League under a new system when they lost 3-0 at Weymouth.

They must have seemed the darkest days in the club’s history. Just as now for Leyton Orient, who just three years ago lost only on penalties to Rotherham in a Wembley play-off final for a place in the Championship, but now find themselves victims of a spiteful, absentee owner and relegated to the National League.

What now for them amid the despair? Will they find a buyer? There are hopes now as the owner Francesco Becchetti has apparently paid off chunks of the £10 million debt he had saddled the club with, perhaps as part of a deal with a new owner, perhaps because he intends to stay on. Orient fans will hope it is the former.

Or will the club have to reform, backed by a supporters’ trust and hope that the owner of Brisbane Road, Barry Hearn, allows them to play there at an affordable rent? And is that sustainable if, as a new club, they are sent down to Step 5 – for Orient fans, that could mean Essex Senior League – as regulations indicate?

In these pages recently, Sam Elliott wrote persuasively as an AFC Wimbledon fan about the initial dismay, then delight, of following a new club through the leagues back to the promised land of the Football League, then winning a play-off to make League One.

I have experienced something similar in helping set up Salisbury FC, though the pleasure of a promotion last season and runners-up in Evo-Stik Southern South and West was tinged with pain last Monday when we lost the play-off final to Tiverton Town.

There is indeed life after the demise of a club, though for Orient’s sake, you hope it doesn’t come to that and new ownership is in the offing, but that if it does, the game’s authorities will look kindly on them should they have to start anew.

There is, indeed, scope within the regulations to award a place in the National League to a reformed Football League club.

The inserted clause came at a time when Portsmouth were even more of a similar basket case of a club and in danger of folding, though were in the Premier League at the time.

As part of a Non-League club myself, I would not object to any new Orient club being placed in the National League but doubtless there will be others who would insist they be demoted lower. To me, that is just more spite; adding insult to injury.

To daunted Orient fans I would point out Lincoln City of those 30 years ago and encourage them to respect the Vanarama National League, if that is where they are placed. Once Lincoln did, they went on to win the Conference that same season.

And look at the club these days. This season the revenue from the FA Cup run to a quarter-final against Arsenal was estimated at an astonishing £3 million.

Then there is the league revenue. An excellent 10,031 saw them clinch the title by beating Macclesfield 2-1 at Sincil Bank. In the season the Imps were relegated again from League Two, 2010-11, their average home crowd was 3,508.

Orient have to hope whoever is in charge once the dust has settled will back a decent manager, though management teams like Danny and Nicky Cowley take some finding.

And if anyone doubts the job they have done, just look at the fate of the club they left, with Braintree going from play-offs to relegation in 12 months.

It can be done, however. Leyton Orient will not be down among the dead men. They will be in, as Lincoln were, with the list of the slumbering who need a good prod to turn around their lumbering.