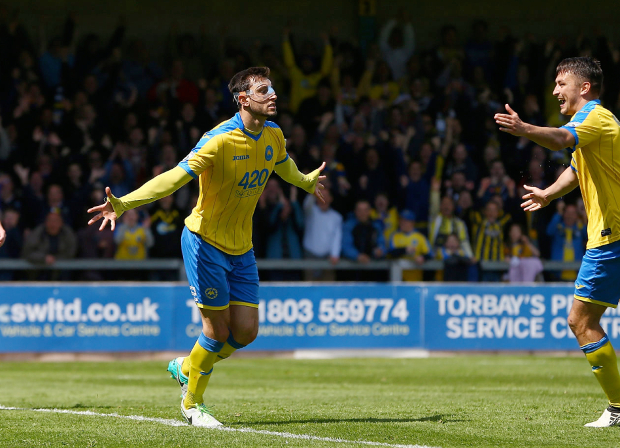 HAVING been schooled to defend the Italian way, just what was Myles Anderson doing leaving the comfort-zone of his own half and abandoning his steadfast defensive responsibilities to fire Torquay United to survival with two goals?

From Jimmy Glass to Newport County’s one-goal-a-season wonder Mark O’Brien last weekend, the climax of the season forever throws up unlikely men of the moment to save skins It’s not always easy to spot them.

They say not all superheroes wear capes, but at least this one had a mask.

“Why was I up there? Search me!” laughed the 27-year-old, whose deadly double on the final day of the season helped secure the Gulls’ National League status.

“But I do love to venture forward and do my bit. I just love to play football – this is the worst time of the year for me when it all stops.

“It’s too big a club to go down, Torquay should be in the Football League and going forward with the new owners I can’t see why in the years to come they can’t do what Lincoln City have done so well and get back up there.”

With Anderson? Who knows. Nothing has been sorted yet but he is certainly open to a conversation.

“We’ll have to see what happens there but one thing is for sure, Torquay’s been brilliant for me,” he added.

“I think the spirit we showed to pull it off when the odds were really against us with a few games to go shows the manager (Kevin Nicholson) is building something down there.”

Some say Anderson is a glutton for punishment. Since coming back from over three years in Italy – an incredible experience according to the London-based player – it’s fair to say his return to England made him go the extra mile.

“My two clubs since I came home are Barrow, and of course Torquay!” he smiles. “I have literally gone from one end of the country to another.

“I live in north London, so it was either five hours up, or four hours down. It’s funny how the two clubs I have played for have been at opposite ends of the table but as I said, I’ll do whatever it takes to play football.

“I was unlucky at Barrow. I came in and they were on an incredible run. Their back four picked itself after that, and a very rare thing happened in my months there and that was neither of them picked up injuries or suspensions. I totally understood why I didn’t really get a look in.

“So it was down to the other end of the country and thankfully I got plenty of action.”

Playing for Serie C side Monza, he also represented Chievo and L’Aquila, before his final stop in Rome, with Racing. It was a defender’s dream.

He added: “Everything they say is right, the defensive side of the game out there is an art form – it really is.

“It’s studied, and you learn and learn and learn. Every day, it’s something and you pick it up quickly. The game is very different there, but for a defender there is no better place to be taught your position.”