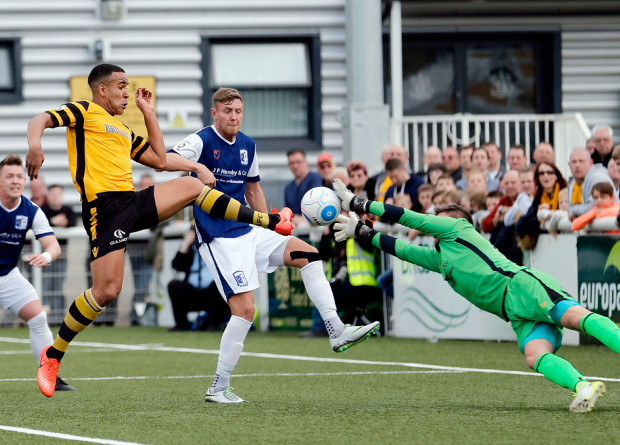 KEVIN LOKKO is out to prove he’s not a one-season wonder at Maidstone United.

The 21-year-old joined Jay Saunders’ side last season on the back of relegation from Non-League’s top flight with Welling United.

But the defender became a key part of the Stones as they finished mid-table in their first campaign at Step 1.

Lokko’s performances were picked up by England C boss Paul Fairclough, who selected the former Norwich City and Colchester United man for the recent games against Panjab FA and Jersey.

And he’s looking forward to building on a good year as Maidstone look to really establish themselves in the National League.

“Maidstone had a good year last year, but I think next year will be even better,” Lokko told The NLP. “We’ve made some good signings and we’re heading in the right direction.

“Personally I want to have an even better season than I’ve just had. I want to keep more clean sheets, score more goals and give even better performances. I’m looking forward to it and I’m going to give it my all.

“I’ve got a big season coming up. Lots of England C players have gone on to get moves, but I can’t just think because I’ve got that on my CV that a move up is going to happen. I’ve got to back it up with more big performances and then hopefully after another season I will be in a good position.”

Lokko, who coaches for Hackney-based charity ReachOut, is also hoping Maidstone’s switch to day-time training from next season can push his game on. And he’s keen to keep repaying the faith Saunders has shown in his ability.

“Times were quite tough after relegation with Welling because I thought I might have to drop down another level,” Lokko said.

“Fortunately Maidstone gave me a chance and things are looking up. With the promotions they’ve had over recent years, the massive crowds, it was a no brainer for me to go there.

“I’ve really enjoyed it. It’s been the best year of my career. I know that I am good enough to play at this level and even above, but obviously being relegated with Welling doesn’t look great on my CV.

“So I was very grateful to Maidstone for giving me the opportunity. I made sure I grabbed it and kept my shirt.”