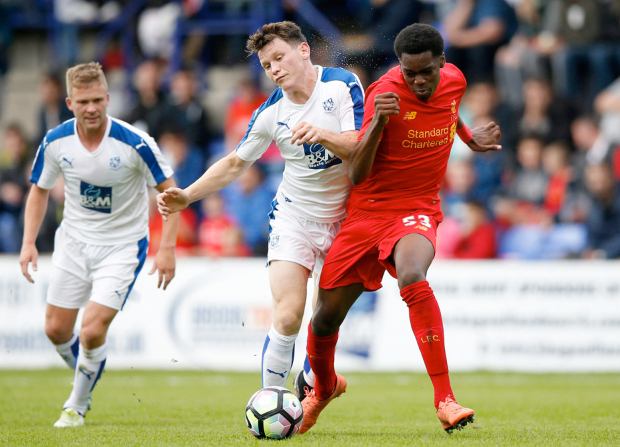 JURGEN KLOPP’S swashbuckling Liverpool side might have their sights set on Champions League glory in the forthcoming campaign, but that didn’t stop them kicking off pre-season with a welcome visit to near-neighbours Tranmere.

It’s been a long 16 years since Rovers faced both top-flight Merseyside clubs in competitive fixtures – John Aldridge’s side famously defeating Everton 3-0 at Goodison Park in the FA Cup fourth round before bowing out 4-2 to the Reds at a sold-out Prenton Park in the quarter-finals.

Only the River Mersey separates Birkenhead from Liverpool, but in footballing terms they are light years apart – all the more significant then that the 18-time English champions agreed to help the club for the second successive season with a money-spinning pre-season opener at Prenton Park.

With a long-standing supporter base on the Wirral, a healthy crowd of 13,444 witnessed the visitors run out 4-0 winners against a Tranmere side who can at the very least take credit for holding firm for more than half an hour against what was effectively Liverpool’s first team.

James Milner (pen) and the colossal Marko Grujic struck in the opening 45 minutes before Klopp swapped his entire team for a more youthful but-no-less-able offering for the second period.

Tranmere were forced to defend in numbers for the majority of the match with Pedro Chirivella and a Ben Woodburn spot-kick completing the scoreline.

It was difficult to gauge what boss Micky Mellon and his players got out of the match and the sight of an all-red Bebington Kop and half and half scarves hardly impressed the Super White Army diehards, but no criticism could be levied at Liverpool, whose attendance ensured the tills rung hard at Prenton Park all evening.

Klopp signed autographs and batted off concerns from the press pack regarding his lack of significant transfer activity this summer, saying: “We are convinced about the way we are going. I’m not nervous. That’s the message.”

Rovers boss Mellon was guarded when accepting that the search for a replacement for centre-back Michael Ihiekwe was on-going.

He said: “We might be close, we might not be. We’ve been close before. No one is coming for sure, but we’re looking at a number of options.”

The Scot was more forthright in shutting down the prospect of any more players leaving Prenton Park, adding: “I’ll answer this for the last time: we have no need and there is no plan to move anyone on.”