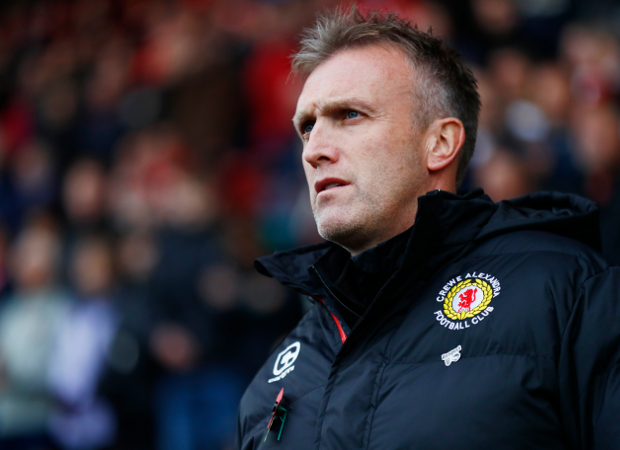 GETTING the sack isn’t all bad. “Looking back now, I needed the break,” admits Steve Davis, whose six-year stint in charge of Crewe Alexandra was terminated in January.

“I hadn’t really had one for 35 years. So I spent a couple of months just chilling. I went on holiday with my wife in March, somewhere hot. It’s the first time I’ve been able to do that since I left school at 15.

“I also spent a lot of time with my grandsons. Three and one they are, absolutely brilliant. And into their footy as well – the three-year-old has been kicking a ball since he could walk.”

Getting back in though, that’s the hard part. Which is why the 51-year-old was elated to be named the new manager of Leyton Orient last week.

“It is hard,” says Davis, who started his managerial career at Nantwich in 2004 after an 18-year career in the Football League with the likes of Burnley, Barnsley and Crewe.

“I know lads who’d been out 12, 18 months. You get forgotten about and there are so many people after the jobs.

“And there are so many managers coming in from overseas. It started in the Premier League but it’s filtering down. League Two’s no different now really.

“New owners come in and demand their own man, either a famous name or someone from abroad.

“They go off the name, rather than what they’ve achieved as a manager. They look for the glamour because it puts bums on seats…initially.

“But you’ve got to be able to do the job, and in that sense they’re no different to anyone else. It’s the same set of players, the same budget. Often a massive difference in quality compared to what they’re used to.

“Is that the best way to learn your trade? Probably not. You need to get your hands dirty. I had a great grounding at Nantwich. Pumping balls up, washing the kit, doing the schools and community work.

“I was out most days and nights but it made everything that came later easier. It’s the same for a lot of English coaches.

“Given an opportunity, we could show the owners and chairmen what we’re capable of. Sadly, I don’t think it’s going to happen. All we can do is either shuffle down or go abroad.”

Orient fans subjected to the ruinous reign of Francesco Becchetti will will surely sympathise with their new manager.

When he wasn’t dodging bills or boycotting matches, the hapless Italian was appointing the likes of Mauro Milanese and Fabio Liverani, one of many blunders that saw Orient slide from the brink of the Championship to the National League in less than three years.

But for local businessman Nigel Travis, whose consortium bought Becchetti out in June, the club might even have gone bust.

“I brought a team here with Crewe last season,” recalls Davis. “We were struggling, but we could see it was much, much worse. It was pure mismanagement. You can’t say anything else, really.

“But I’ve met the new owners and they’re fantastic people – very passionate about the club and where they want to take it. They want to do things slowly, build a foundation.

“Their expectation isn’t high. They’re looking for stability this season and the supporters I’ve spoken to recognise that.

“They’re just pleased they’ve got their club back. The debts are sorted. Everyone has been paid what they’re owed. It’s time to forget the last three years.”

Davis reckons Orient are “about two months behind” in terms of recruitment.

“People are working half eight until midnight, just trying to get everything right,” he says.

Davis is seeking another six or seven.

“There are some good young players here, and they’ll get their chance,” he adds. “But what we need now are players with experience of this division and the one above. Above all, we need people who want to be here, who’ll show some passion and fight for the club. That’s what I’m stressing to the players at the moment. We’ve got to be together. After everything that’s happened, we need to get a sense of unity back.”

And whilst Crewe had a reputation for playing attractive football, Davis says Orient’s hamstrung preparations mean pragmatism is the order of the day.

“Yes, people like to be entertained. I want my team to entertain me. But if you’re playing well and not winning, people just get frustrated.”