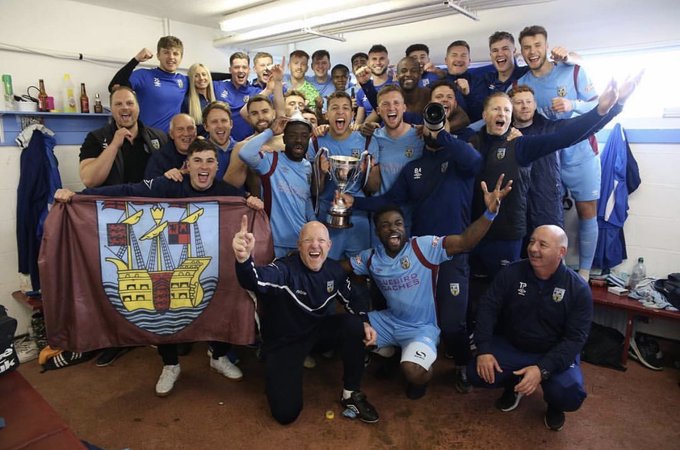 Promotion-winning Weymouth boss Mark Molesley is reported to be in talks with Southend United over succeeding Sol Campbell as manager.

Molesley – who was hailed last week by Terras chairman Ian White as best manager he’s seen during his 23 years at the club after their National League South play-off success – is under contract for the new season but could be tempted to take the Roots Hall role in League Two.

After guiding the Terras to successive promotions, the Dorset Echo and Essex media are reporting that Shrimpers chairman Ron Martin has upped his interest in the 39-year-old after previously considering Barnet’s Darren Currie and ex-Southend manager Steve Tilson.

Southend have been without a manager since former England defender Campbell left in June and Harry Redknapp has publicly backed Molesley who’s taken the Terras back to Non-League’s top flight for the first time since 2009 while also coaching Bournemouth’s Under 21 side.

?? “People thought we couldn’t get the club back to where it used to be in the National League, they said it couldn’t be done”

Mark Molesley couldn’t be prouder of guiding Weymouth back to the fifth tier after an eleven-year absence ??

“I spoke to Ron about Mark,” Redknapp told the Basildon, Canvey and Southend Echo. “I’ve followed Weymouth and seen he’s done a great job there.

“He worked with Eddie Howe at Bournemouth training the under 21s all week and then took Weymouth in the evenings and at the weekend too.

“I know Eddie absolutely loved him and said he’s very good so I really do think he’s someone with a very bright future in the game.”

The club have yet to comment on Monday’s reports since White hailed Molesley last week, telling EchoSport: “We have, in my view, the best manager that I’ve ever seen here in my 23 years at the club, without a shadow of a doubt.

“The other thing a lot of people forget about Mark is that Mark’s had to work within our regime as well. Mark has been brilliant, I’ve got to be fair to him. I’ve said to him ‘please come to me if you want (to sign) somebody, we’ll look at it, but if the club can’t afford it, we don’t do it.’

? Ian White believes Mark Molesley is the best manager he has seen during his 23 years at the Terras#UpTheTerras https://t.co/fYYqoolofW

“He understands it, because the club’s had too much bad history. It’s so important for us to make people realise that the club is different now.”