MARKSMAN: Kieffer Moore has five goals in 16 appearances for Wales

KIEFFER MOORE was able to discover the player he is today in Non-League, says former teammate Rob Sinclair.

Midfielder Sinclair played with the Wales international at Forest Green Rovers as the former Truro City and Dorchester man tried to find his way again following spells in the EFL with Yeovil Town and at Norwegian side Viking.

Struggling to get into Rovers’ side, a loan spell under Kevin Nicholson at Torquay United galvanised him as the England C international scored five goals in four games which quickly prompted a move to Ipswich Town under Mick McCarthy.

Prolific moves to Rotherham United, Barnsley and Wigan Athletic followed, with Moore, 28, now back with McCarthy playing in the Championship at Cardiff City and a big part of Wales’ Euro 2020 plans.

“He was always better than the level,” Sinclair, the former Forest Green Rovers, Salisbury and Stevenage midfielder, now at Bedford Town, told The NLP.

“But, fair play to him, he has obviously worked ridiculously hard to get to the level he was at.

“At Forest Green he wasn’t really in favour. He went to Torquay and absolutely smashed it. Since then he’s gone on and on. It’s confidence isn’t it?

“He was even playing centre half at times when I was at Forest Green. His whole presence, his physicality, how big he was, strong, quick – he had everything even back then.

“At that point he was probably finding out what he is as a player. Up front, centre-half, chucked back up front, maybe on the bench – he was finding his feet. Once it clicked, he was gone – it happened that quick.

“That’s why I think players shouldn’t be reluctant to go on loan. He could have quite easily stayed Forest Green. But he thought, ‘No, I will show them I should be playing every week’. It takes a bit about you to do that. He went to Torquay, smashed it, and all of a sudden he got a move to Ipswich. Don’t be afraid to take that risk.”

Sinclair believes Moore – who has scored five goals for Wales in 16 appearances – hasn’t completed his rise just yet, much like another one of his former Forest Green teammates Ethan Pinnock, who is celebrating promotion to the Premier League with Brentford.

“It wouldn’t surprise me if Kieffer goes on again – a bit like Ethan Pinnock,” Sinclair said. “The day I saw Ethan I said, ‘He’ll play in the Premier League one day’. He’s the best centre half I’ve ever played with. And I played with people like Jamal Lascelles, who is at Newcastle.

“The nice thing with lads like Ethan and Kieffer is it hasn’t gone to their heads. Some go on and their egos get big. But they are genuine, stayed the same and take time to speak to you.

“It’s credit to them and their upbringing.” 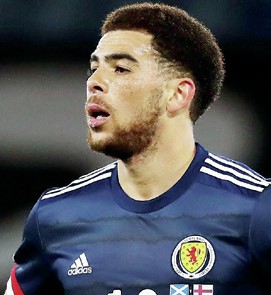