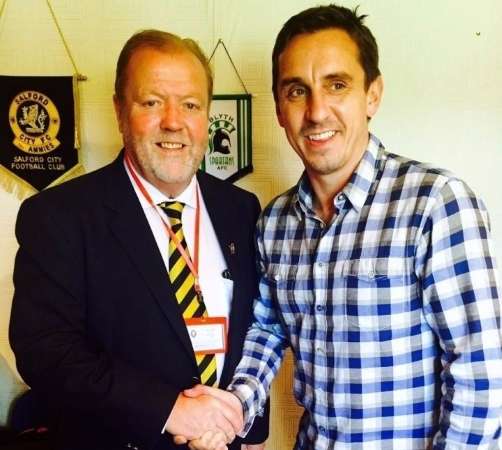 RUSHALL OLYMPIC chairman John Allen didn’t have to look far for his club’s new manager – he appointed himself!

Allen was left searching for a new boss following Richard Sneekes’ decision to step down last week after two years at the Pics.

But rather than wasting time searching for the right candidate and conducting interviews, the Dales Lane chief decided he would return to the dugout.

Allen isn’t a managerial rookie. He originally joined the West Midlands outfit as manager in September 1997 and his last season as boss was 2005-06 when he guided the side to tenth in their first Southern League season while also beating Stoke City to lift the Staffordshire Senior Cup.

He stepped down just weeks later to focus on the business side of the club as chairman, a post he still holds.

The former Hednesford Town assistant manager will now combine both on and off field roles as he tries to build on the Pics’  ninth and tenth-placed finishes under Sneekes.

Allen will be assisted by the experienced Bernard McNally, who was sacked by Hednesford in December, while ex-Halesowen and Sutton Coldfield man Trevor Burroughs joins as first team coach.

A club statement read: “Rushall Olympic Football Club are pleased to confirm that John Allen has returned to the Pics’ managerial hotseat and takes over from previous boss Richard Sneekes with immediate effect.

“The club are also delighted to welcome Bernard McNally to Dales Lane and Bernard becomes assistant manager. Bernard has a wealth of experience in the game and has also gained his UEFA Pro Licence.

“Another new appointment as first team coach is the highly experienced and well respected Trevor Burroughs.”