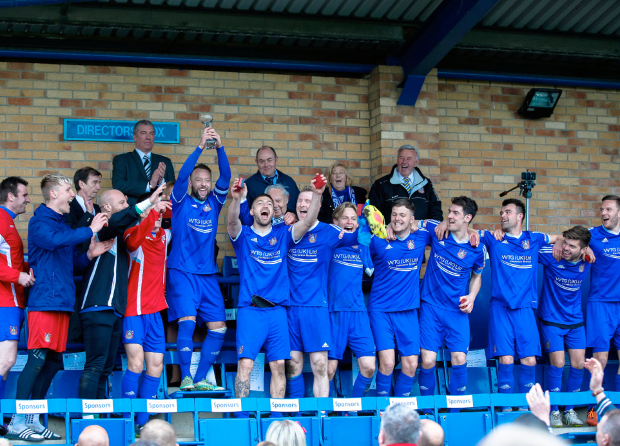 FARSLEY CELTIC have turned to Adam Lakeland to lead them into Step 3 after joint-bosses John Deacey and Neil Parsley dramatically quit the club following promotion.

Celtic only missed out on the Evo-Stik NPL Division One North title by one point to Lancaster City but they did go up through the play-offs.

After seeing off Colne in the semi-finals, Farsley overcame Ossett Town in the final, meaning they will kick-off next season in the Evo-Stik NPL Premier.

However, they will be starting next term with a new man in charge after Deacey and Parsley decided to leave Throstle Nest, leaving fans stunned.

The duo led the club to promotion as well as winning the West Riding Senior Cup but both left after attending Celtic’s end-of-season awards last Friday.

Farsley moved quickly to bring in a new man, naming former Northwich Victoria boss Lakeland as boss ahead of a busy summer.

Lakeland, who will be assisted by former Celtic player Mark Bett, told Farsley’s website: “I was at Curzon Ashton for a couple of years and I had a really good time there. We got promoted from the Evo-Stik league and up to the National League North in just two seasons. Following that I went and worked for Blackburn Academy for a year.

“I decided to take my first step as a manager and went to Northwich last January and we got them into the play-offs – unfortunately we lost out to Spennymoor that season, but we had a good year. The following season wasn’t great as I decided to leave due to stuff that was going on at the time.

“It is strange coming into a situation where you have a team that has just won promotion and you have to take them on, but it will be a great challenge.”

Following the exits of Deacey and Parsley, Farsley chairman John Palmer said: “Both have played a huge part of this football club over the last 10-12 years. John has been fantastic over his two spells at the club, which culminated with a fantastic promotion campaign last year.

“I cannot thank Neil enough for his time here at Farsley Celtic. He came back as manager when we had to reform the club and he has been brilliant over these last seven seasons.

“I am personally so pleased that they gained the club promotion in what has turned out to be their last season.”